I hired the procurement office, researched both fuels, built both, signed contract, ordered the tankers and now that I have it toggled on in the operations menu it has been over a year gametime and no one needs fuel? in fact most planes land with 100% (how do they get here and not waste any fuel)

anyone else having this problem or know what I might be able to do to fix?

Did u turn on refueling in the operations panel?

have you bought refuelling trucks and a vehicle depot as well?

I have the same probleme. Activated refueling in the operations overview, bought the fueldepot, trucks and the vehicle depot. All incomming flight have 100% fuel. It worked fine in earlier versions.

Yes I have turned on refueling in the operations panel

Yes, I actually bought two of each. just sit there. never move. I believe this to be a new problem as I have logged around 30 hours playing a few different saves and never encountered this problem before

Where did you build your airport?

Can you screenshot your location (in the dashboard, iirc)?

Sure. I chose to do it at Honolulu this time and flights are coming from all over the place, I have done airports in berlin, Austin, Bucharest, Chicago, and anchorage and haven’t had this issue. 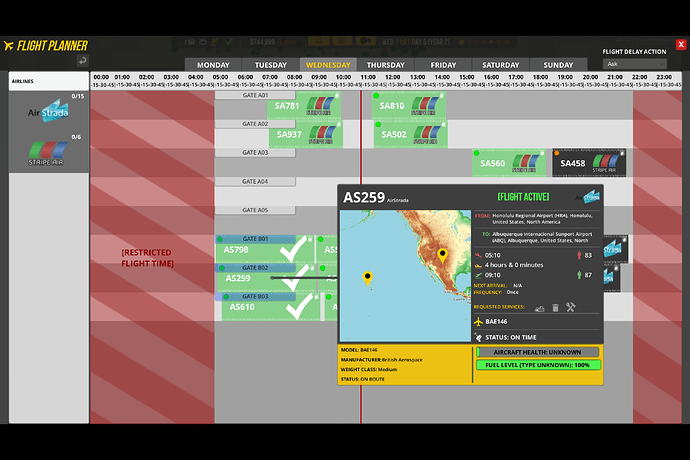 Then my hypothesis is correct.

Start over at a new location. This “bug” depends on location. In essence, there is no airport within an appropriate distance to that place. Therefore, the game spawns planes that are always full (the other details of the theory is that the fuel tank is stretched based on the destination, therefore they always stay at 100%).

Ah, that sucks. It does make a lot of sense though. Thanks for the help!

That explains a lot, my airport is in Honolulu. Thanks!