Boarding time too close to departure for remote stands

Is there (or could there be) a way to change the boarding start time relative to departure for remote stands? I find that flights are always delayed for remote stands because boarding starts too late (too close to departure time) to allow passengers to get on the bus and get to the remote stand in time. The distance from the boarding gate/bus to the aircraft stand is not too long and I tried with 2 medium boarding desks and a staff room close-by with passenger service agents to be there on time. Also, aircraft is idle for lots of time and ready to depart except for boarding passengers (so no delay due to baggage, refuelling etc.). Any comments/suggestions?

would be nice to in fucture have more control over stands, would be nice to have some kind of slider to enable us to set stands that may be far away to have longer time to board. But short term I think it needs another 30 mins added as its too tight especially for planes with less than 50 passengers, gives under an hour before departure time to board.

I agree, the simulation engine today can’t really account for boarding time in relation to distance to remote stands and that’s a problem. Perhaps manual configuration could fix that but I would need to think about it a bit first.

Thanks for the quick reply. Yes, some control would be nice, either by being able to set the actual time interval for boarding with respect to departure time and/or else, for example, to set options to start boarding once previous passengers disembarked and re-fuelling is complete. Accounting for distance to the stand and number of people would be great too.

In any case, as gobbybobby said, it would be nice to have a quick fix for now by just adding some time (30min to 1hour) to make the boarding start before.

I just wanted to post my newest observation when the board suggested me a similar topic.
Today I built a tiny test airport in order to test remote stands. 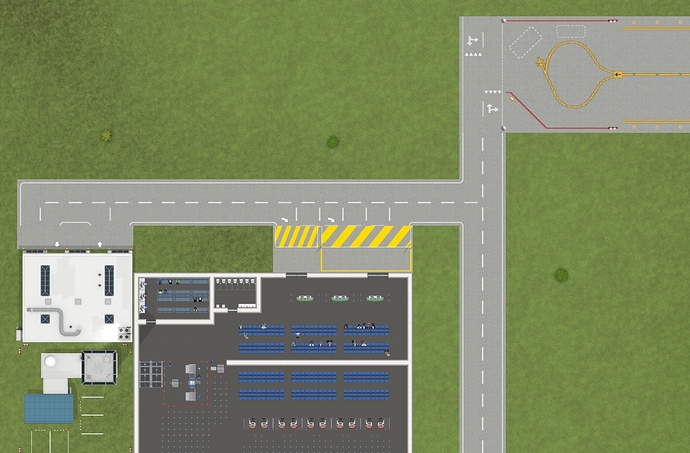 As you see the layout is very minimalistic. I tried to put everything quite close together. The airport has 10 each passenger service agents, security officers and ramp agent.

My observation is for a 16 passenger flight:

I’m wondering why the bus takes so long for this short and why he does some crazy loops which cost nearly 5 minutes.

I think 30 minutes is a bit to tight for serving a small remote stand. I don’t know how many boarding desks are recommended for small stands but for terminal attached stands I’m usually fine with two small or one large. I suppose most people will have greater distance between shuttle bus stop and the remote stand so time will be a even bigger problem. Of course passengers should not have to wait in the plane for an hour before take-off but one minute is a bit short as well.

Ya manual adjustment will be great. Even if it is not a continuous slider, it can be a few blocks of 30 min, 1 hour, 90 min and so on.

Yeah, any remote stands I ever use always end up delayed at boarding.

Wanted to bump this to see if any thoughts were being implemented.

I have noticed that my flights at remote stands with more than 50 pax or so seem to push back relatively on time, whereas flights with fewer pax (say a CRJ with 25) always boards and pushes back late. It appears the game sets the boarding time earlier for flights with more pax. It does not take much additional time for an extra 40 pax to board the bus so it ends up leaving the bus stop for the stand with 20-30 minutes prior to the scheduled push time. The flight with fewer pax boards at a later time and the bus doesn’t leave the bus stop until around 5 minutes prior to the scheduled push time and there is no way for it to make it to the remote stand and board everyone in that short time so these flights always leave late.

Remote stands don’t work well for now.
No matter how near or far they are from the terminal, every task is complete on time except for boarding.