I’m new to the game and i already played like 60h, really addictive.
Great works developers <3

After transforming the airport, while i was getting more familiar with the game, i find myself with some bugs i can’t solve.

First: my general schedule is always late. Really late. My flights from the night are landing the day after, with 6,8,10,12 hours late landing.
Everything seems work good, i have def enough staff (but for the janitors that are never enough), everything is balanced (4vmedium stands have, 1 baggage bay, 8 check in desks, plenty of security gates) and after try with the remote stands, i decided to go with the direct ones (but the last 4 added).
I even try to only accept flights on daytime to recover the delays on night. Not working enough.
(screenshots down).
It seems that the slowing part is the boarding, starting late, and getting longer by waiting pax

Second: bus stops, private cars and taxis are stuckin everything. I read about this on other topics and it seems the only solution is to go only with the subways (it really smoothed the flow).
I’ve built even more and more bus stops and stands on level -1 but nothing, just stuckin thousands of people there. Like there are no taxi and bus coming, or not enough.
Any new solution? 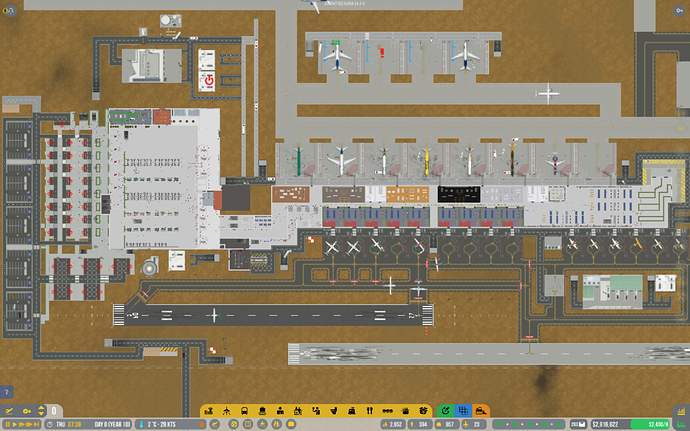 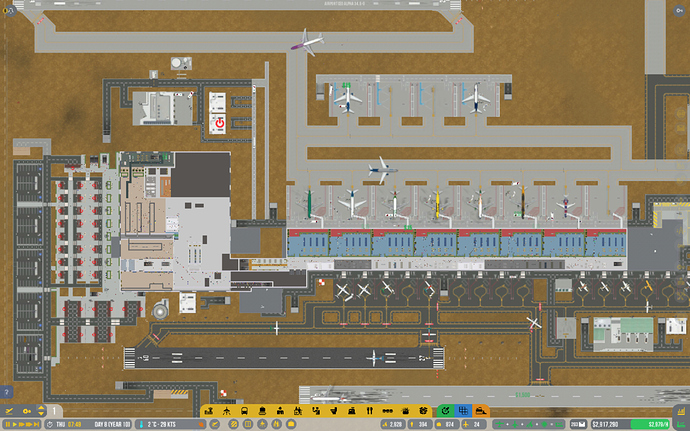 congratulations, you gained the “massive delays”-Button

First of all: With my PC I cannot handle more then 2000 PAX without massive perfomence issues… What helps out is to lower the "passengers per flight ratio within the gameplay-settings; it´s not the most beautiful, but a very effective tool to keep your airport playable.

In terms of the massive delays: Did I get it right, that they already land with delay? Probably your runway capacity is to small. When you click on a runway, theres somthing like “flights in pattern”, which counts the planes trying to land at this runway in this moment.

Actually, i just tried to do what i haven’t thought before.
i just assigned a vehicle to each stand, and delays dropped down. Weird, i had several deposit and a good amount of -1 parking lots under the stands, so i thought it should be enough.
So, no more big big big delays, still many planes get so slow to board the last late pax, specially the remote stands that seems stucked when they miss last pax, like if the bus don,'t pass by form the bus stop anymore to pick the last ones.

Still another problem, even now that i fixed the delays, is that the reputation i’ve with every single company is 0%. The game doesn’t give a shit and they still sign contracts with me, but what i do wrong?

Thanks for the ratio tip!
F

It seems that in current version there’s a bug with vehicle parking which can cause quite a bit of delays (I’ve reported it already a few days ago): Vehicles always go to the depot / parking lot which was built first. If it’s full, they go to the one built second etc.
In earlier versions they chose the parking structure closest to them which was the correct behaviour. Now they sometimes circle around the whole airport just because the depot furthest away was built earlier.
Hope that will be fixed soon because it’s seriously affecting the airport operations.

I was to optimist.
Actually my delays came back even now. Just really slow boarding most of the time, and then more than 20 flights late, some even for 15 hours, as before…

If boarding is starting late the reason could be that you either have not enough passenger service agents or that they’re too far away (staff room not near the gates).
In the flight monitor you could check what’s displayed. In my experience, if staff is already on the way but too far away it will show “Go to gate”. If there’s not enough staff available, it won’t even show that.

Hi and welcome to ACEO!

about performance: RAM and SSD are helping a lot, here…
actually ACEO is using 12-13GB of my total 16GB RAM… Thinking about upgrading to 32GB, as it uses a lot of additional virtual memory on my hdd, too… a powerful CPU, is useful, too…

grapics card is IMHO not that important, I can only see little performance differences between a 860M and 1070 or between different resolutions…
The game itself has limits, as I remember, but at the moment I’m able to handle 12k-15k pax + 1,2k staff in my airport, at the same time with still having two-digits frame rates from 12-20, which is still quite good playable, IMHO.

About your delays:
more screenshots of your other floors would be helpful, but as I can see here, I would recommend to look at or check/change:

in general I suggest not to use auto-flight-planner, as long as your airport is not running smoothly. I scheduele flights manually in time slots, so there is not more than 1 flight per 10/15 minutes incoming. Helps a lot with identifying problems/bottlenecks, pax flow is more constantly and job tasks are more evenly spread, too.

Provide some more detailed screens, if this didn’t help although…

Cheers and fly save
annother ACEO-addicted