The current way to purchase vehicles is a bit… inconvenient. Vehicles are scrambled all over the procurement tab. The must be a better way, right? I had the idea to add a vehicle store under the vehicles tab, and since a picture tells more than a thousand words, I went on and designed this. 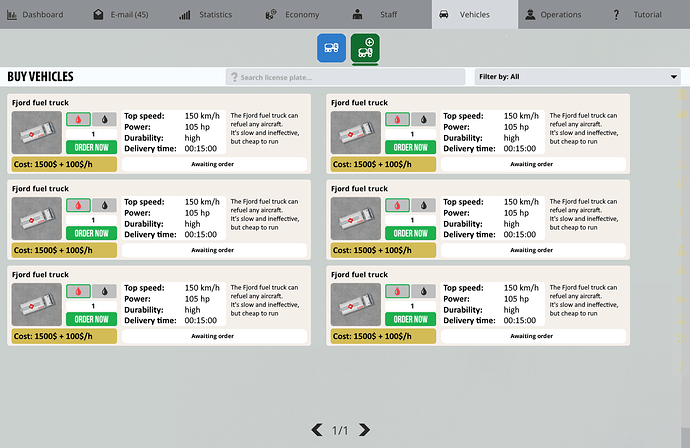 In the case of fuel trucks, rather than having two trucks listed for both fuel variants, I decided to add a button which allows you to choose one of two variants.

In the case of fuel trucks, rather than having two trucks listed for both fuel variants, I decided to add a button which allows you to choose one of two variants.

Maybe this should become a changeable preselection anyway. I don’t think it’s realistic, that a fueltruck can only carry one kind of fuel forever. I think you should be able to change it if you need to.

Well, in reality it would be possible to switch, but the truck would need proper cleaning to avoid contamination. For the game, this might mean you can choose a type when buying and later switch to the other type, but have to wait another X minutes/hours for it to be ready (it might stay in the depot for that time).

I am planning to write very soon multiple “overhaul” idea, one include the procurement and the email.
Spoiler alert : The idea would be to make it as realistic (visually at least) as possible while keeping it simple to avoid having to code a whole real website/email box server system.
So basically you would have “IQEA” website with category (real filters like they usually are in website rather than the game design GUI design) but also personal information with “false” delivery address, previous orders, “fake” banking info and other stuff like that, which can potentially include delivery fee, sales, x remaining and out of stock, variable stuff etc…
(I almost wrote it all here, but with less details).

Looks good! It is not a bad idea to have a dedicated vehicle buy panel. I can understand that the procurement panel is a bit hard to work with at the moment when all procurable items are completely mixed. We are actually looking into a solution which will move certain upgradable items such as “night flights” to a different panel and unlocking them will be a different manner. It is also not so realistic that you would buy such upgrade as it has more to do with regulations and bureaucratic. We will give some more info on this in future devlogs.

We are actually looking into a solution which will move certain upgradable items such as “night flights” to a different panel and unlocking them will be a different manner. It is also not so realistic that you would buy such upgrade as it has more to do with regulations and bureaucratic.

Depends on the government …

Great! These screens indeed need some overhauling. There has also been talk of a tech/research tree or something similar, is that still in the pipeline?

Yes, but we want to take a different approach. We want to avoid the classical “scientific” research tree as it doesn’t really fit the airport world.

I can see several possibilities here, the first one would be based on game year where new stuff become available with time, like starting with old aircraft like Boeing 707 and stuff then slowly getting to the 787 and same with variants of the aircraft, it could work with a lot of things too including vehicle variants (not even require different model, or with only minimal changes which can be bring by an additional image layer which change some details, the same could even apply to many aircraft model which only have small visible changes like winglets for example, and knowing the view is only from above, it make a lot of changes not even required to implement variants, like the difference between a 737-800 and 737 MAX 8 from above being probably only winglets and engine nacelles).
And combined with this, there can be milestones, like increasing airport class with VIP stuff and more luxurious bus for remote stands, so we research some levels of “luxury” and basically we have access to new stuff and it is realistic, as we can’t just get into a car dealer and order a luxury bus, this is more asking Strategy director, CIO and Procurement director to research what and where to find such thing, and the “tree” will simply be idea to improve and the organisation behind it.
It can even be really smart with those worker skill affecting the time it take, and the procurement director basically affecting price related to his skill as if it was negotiating, we could also put things like, discount for larger order of vehicles.
I mean this is not like if one could easily find where to buy a De-Icing vehicle or a Catering truck for sale.
All those research require “milestone” as small airport (except maybe on really cold climate ?) probably don’t often have De-Icing, the way Runway care and maintenance is done is also completely different from a small aerodrome to a big airport, there are also legal requirement which could make some of the tech literally required, while other just improve the airport.

Time availability and research combined are actually quite realistic and can offer a really dynamic gameplay experience while keeping it simple.

Can we also extend this to the other half of the vehicle panel, where the vehicles the airport owns is also shown in portrait panels, two rows of which do not fit into the window properly, and the order of which changes with each access, and even when flipping between pages.

There should also be selections based on the allocations of the vehicles, eg the ability to select vehicles that are allocated to a particular depot or parking lot, or those allocated to stands, or unallocated ones.

Note: Sorry to revive this old post, but it appeared in my feed and I had an input to it…