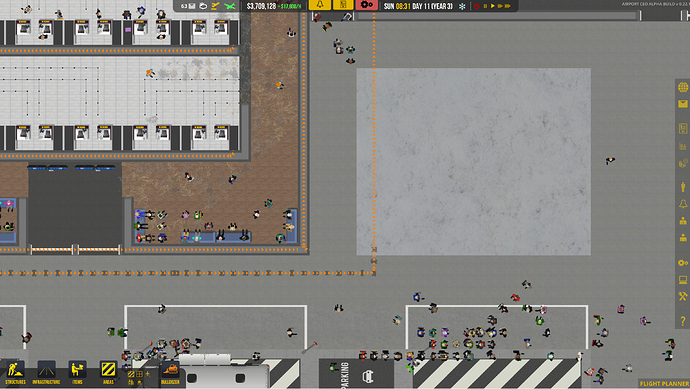 Strange. You should save it and send us a bug report but what happens when you reload the game?

how do I send you a bug report?.. when I reload the game it clears out until another inbound flight lands and unloads bags get stuck in the same spot

how do I send you a bug report?.. when I reload the game it clears out until another inbound flight lands and unloads bags get stuck in the same spot

Allright, that’s good, then we can do proper testing on it. Send it in via www.airportceo.com and the button on the right side!

ok… I have sent my saved files to the bug report

You can edit the savegame’s ItemData.json (I prefer Notepad++, which has no problem with the file size) and replace the values (1->0, 91->90, …) using search&replace, and when you load that tampered savegame, the belts work.

As per 0.22.1, the following search/replace pattern works for me, YMMV:

This is correct! There are some apparent drawbacks working with floats and this is one of them, the issue is caused by bad rounding of the z value for the belt rotation. Good catch!

Edit: Is there anyone here with this issue who has a smaller world? Most worlds we’ve received are extremely large and since we’re not liquidated from Steam yet we’re still on pretty poor equipment which makes problem solving in these worlds very difficult. Any smaller world with these issues would be greatly appreciated.

Issue is now fixed, will be included in next push.

Maybe this is related @Olof?

Hey guys! Just filed a bug report, too, but I wanted to know if I’m maybe nuts. I’m on 0.22.2 and have now a quite big setup with two baggage bay arreas. Since I have two of those, my baggage just stops before them. Everyhting is connected fine, baggage claim and baggage scanning works as expected. I will atttach a screenshot for anyone interested (safe game is attached to bug report; upload here isn’t possible

Everyone with this issue should try 0.22.2 on the experimental branch and see if it’s fixed!

I just tried it and its working