One of my baggage bay is unable to receive bags from Check-in Desk. I See all the bags are at check in desk itself. I carefully checked the conveyor belt direction & everything is fine.
I tried reconnecting to baggage bay many times & also tried save and load. Nothing is working.
What could be the problem…? 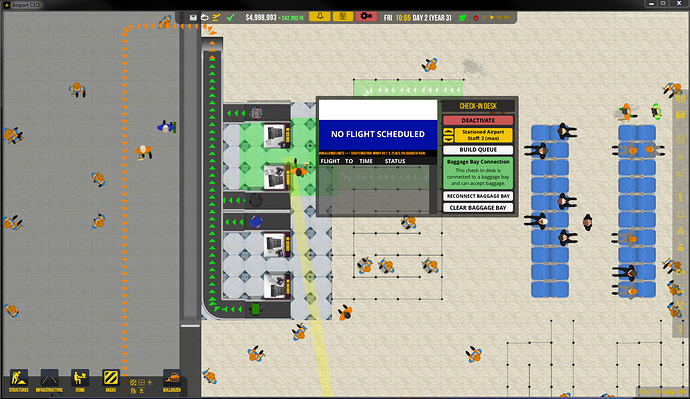 I’ve seen this issue on a few different places now. Have you 100% verified that there are not any missing conveyor belts along the route to the bay?

Yes, I checked the conveyor belts along the route to the bay, its all fine…

I’ve got exactly the same problem with the baggage. Everything is connected in a right way, but the baggage doesn’t make it further than the check-in desk (1). It’s lso weird that people only check in at one desk and refuse to check in at the other desk which is open for the same flight (2). There is also an issue that if there is only one employee at one check in desk, people still check in at both terminals. 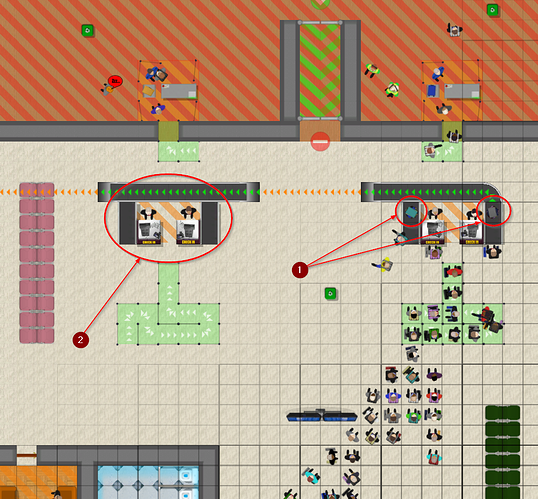 The same thing happens at the baggage bay where the baggage gets also stucked on the belt and doesn’t make it
to the baggage claim area. I’ve read and watched a few tutorials about baggage handling and think that the construction is right.

I don’t know if you have savefiles of this issue already, if not, please let me know and I can provide you the savegames for above mentioned issued/screenshots. (These files also include another issue with passengers walking through walls when there is a security exit in an area which is not accessible (yet) for passengers, even if this is the farest point in the Terminal with no bus or car area close to that.)

I have the same issue, heres a screenshot
Rebuild the checkin, didnt work 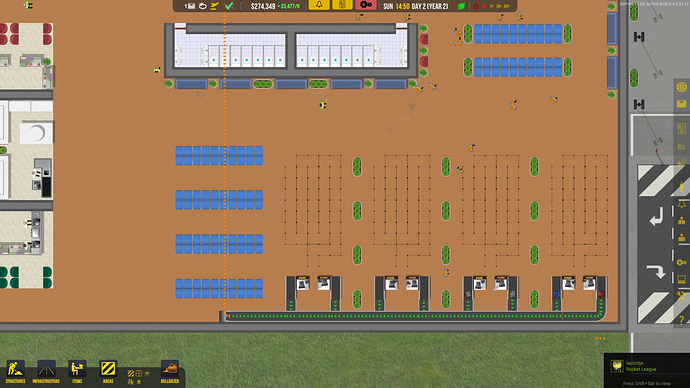 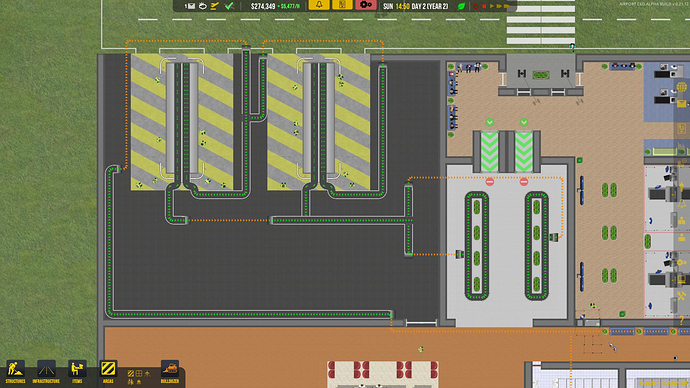 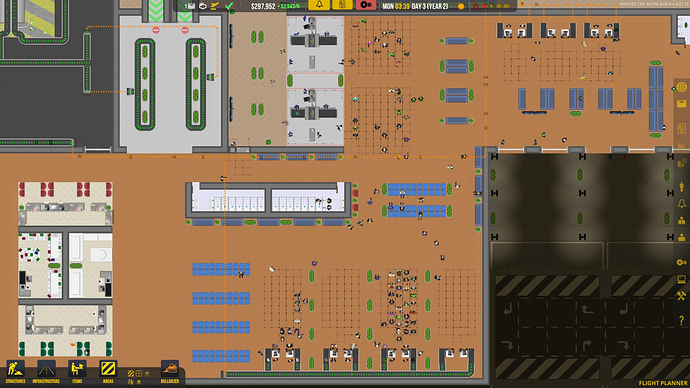 Just the four down there are glitched. The ones in top work fine
I redid the conveyers but it got even worse,
Before, only the right side would work, and not the left side. Looking from the bottom.

Same issue with the baggage bay. I got the check in working great, but when I inserted the security scanner in between, it screwed it all up without any way to fix it.

I found when you have two carousels running side by side and one works but not the other their is a simple fix. Look at the two inner lines that face each other and make them run say right to left, same with both. So the top one goes clockwise and the bottom one goes anti clockwise . It works! Twice I had the problem now and matching the direction of the two inner lines makes it work on both. No idea with the check in desks because both of my pairs are constructed the same way but only one works??? This baggage stuff needs a bit of work doing on it.

Fixed it. Saving and exiting after changes are made to the bathing of the objects along the belts is pretty much an instant fix when something gets stuck. Also, I think one error I made was trying to run belts under the baggage drop-off. I think that really screws things up.

Hey, I’m expierienceing the same issues. Everything is stuck, with or without security check for bags and with or without tilt belts. The baggage just won’t move, unloading works absolutely fine. 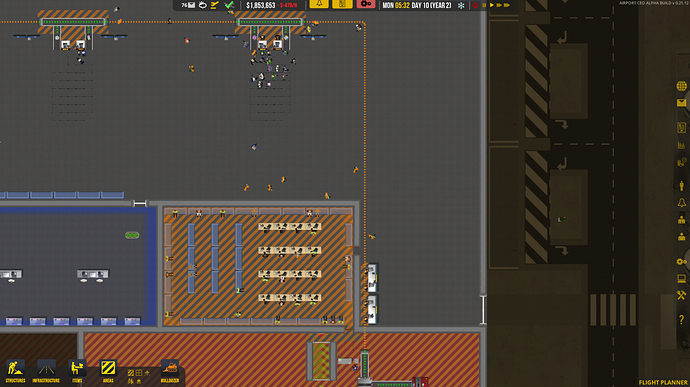 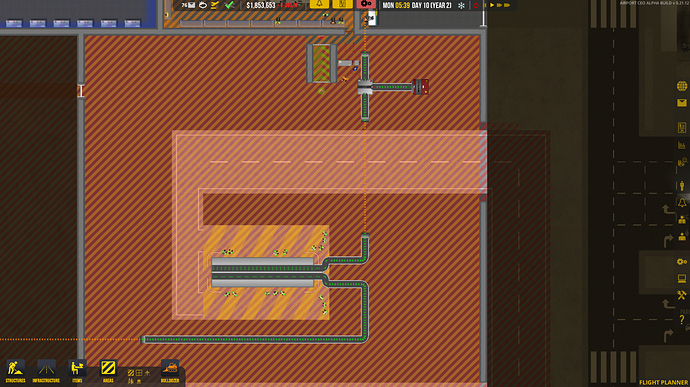 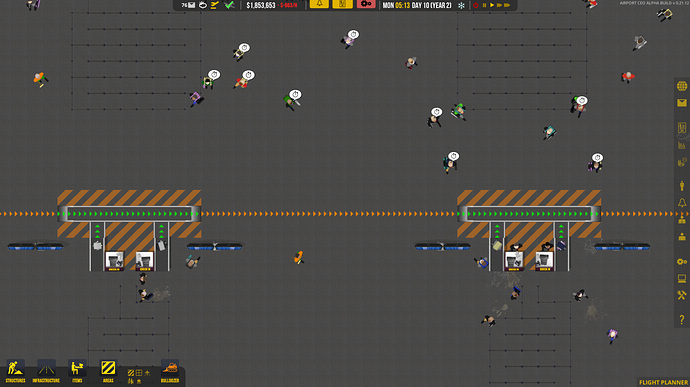 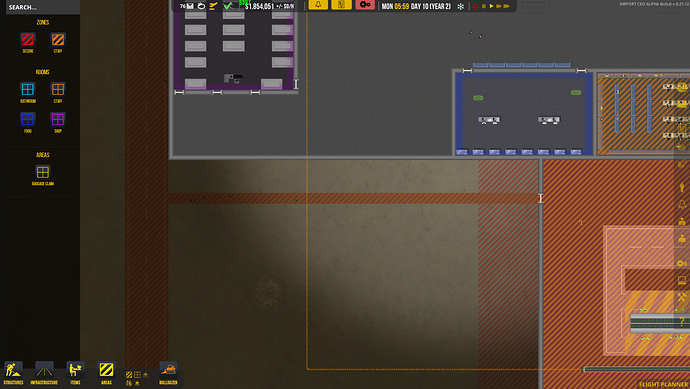 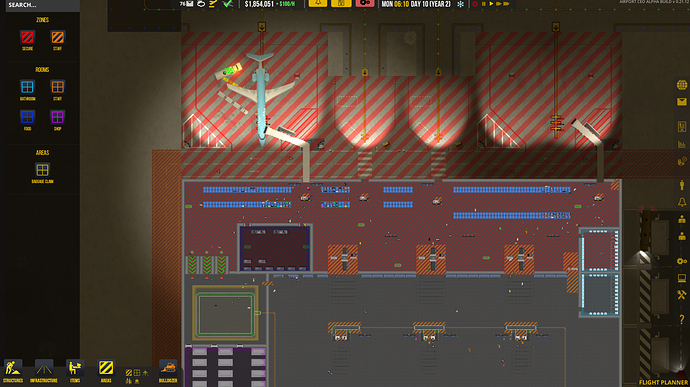 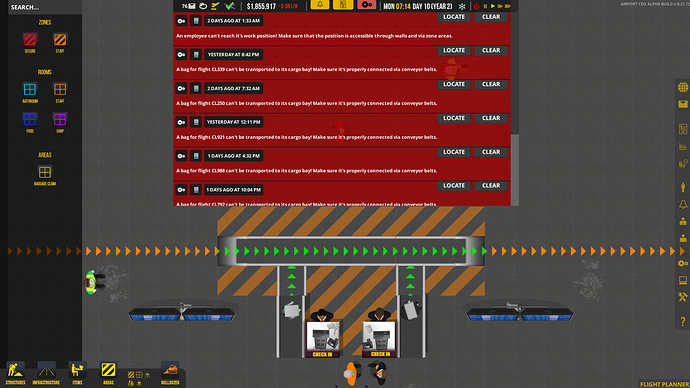 Had the same issue. Rebuild the check-in, belts etc. a few times. Nothing worked.

Then i connected the belt to my first baggage bay, and it started to run.

Many have same issue. Can we raise a bug reports…?

We’re working on a fix for this issue right now so I’d like as many saves in with these issues as possible, if you have not already sent them in!

What files are required for bug reporting?
Is the zip file of Save directory is enough?

What files are required for bug reporting?
Is the zip file of Save directory is enough?
Send me the details…

A zip of all save files is enough, yes. There are exact details on the bug reporting form via the website!

Thank you…
I have submitted the bug report with save directory as .rar file…

Hi Olof. I’ve sent my zipfiles via the form. This includes the issue that two check in desks are open for the same flight but passengers refuse to go to the second chec-in desk

I’ve also added the issue with the ghoststaff handling I’ve mentioned above: Only one counter at the check-in desk is open but passengers are helped by an invisible employee. The passenger checks in and puts his baggage on the belt (which gets stucked) but there is nobody to help him (1). As he receives a boarding card you can see that he really managed to check in (2). I hope this will help. Keep up the good work! 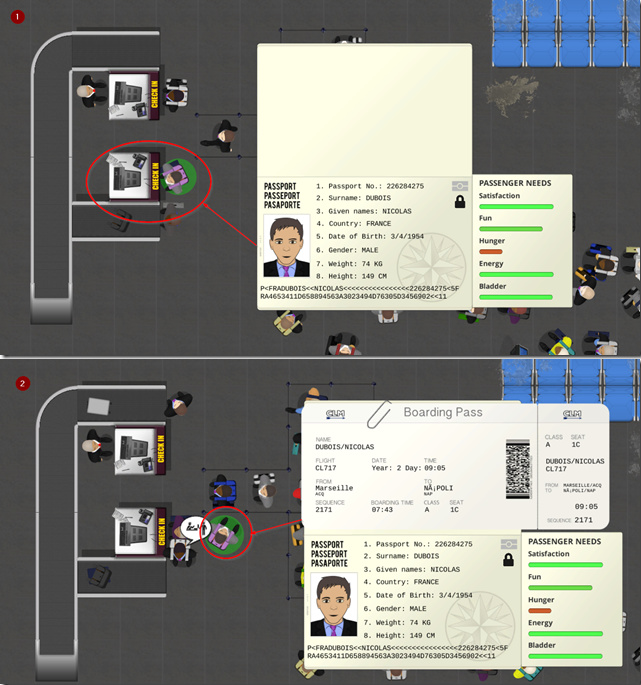 Tested and fixed. Next update will feature the fix.