I realized that many people are still having this problem. I’m playing in the latest available version, Alpha 26.0-0, and the problem appears after a while when everything is working normally. I checked everything, and it looks okay. All the conveyor belts are connected, no part missing or in the wrong direction. I’ve also quit to the main menu and loaded the game again, and it did not work.
here is my conveyor belt system.I have two check-in desks, each going to a cargo bay using the same conveyor belt and going through the same scanners. Before arriving at the cargo bay, the conveyor belts divide. At the exit, they join and go to the baggage claim area. I’ve tried drawing on a print screen to make it easier to understand. 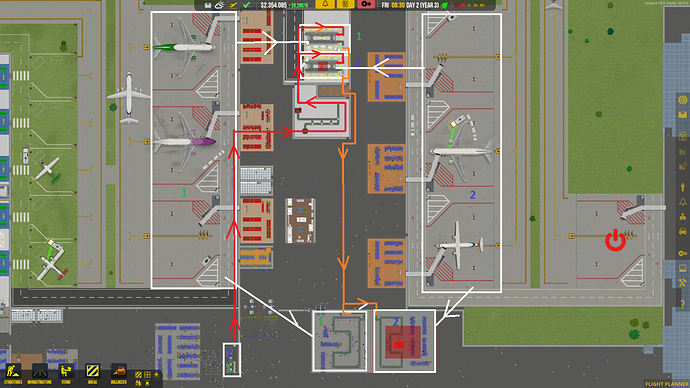 Too me it seems like the system doesn’t know which bags are going to one or two on arrivals.

There’s a trip switch conveyor (can’t remember tech term but it’s in the bag section. It can’t be placed underground and select to destination by right clicking it when it’s made.

That should make it work.

Also just confirming you have set two baggage claim zones. One for one and second for two ?

Too me it seems like the system doesn’t know which bags are going to one or two on arrivals.

Looking at the screen I came to the same conclusion, please get back to us if Jas’s solution did not provide a result!

Hi
You’re right @Jas. It’s a conveyor belt called “tilt tray”. It can only be built overground and has a slower speed. Using this tilt tray makes my system work! Thanks for your help.

@Olof Do you plan to add an underground tilt tray with double speed? This device causes a bottleneck in speed, because all my conveyor belts are high speed.

Yep tilt tray was the word I couldn’t remember lol.