Any tips too improve this?
Thanks. 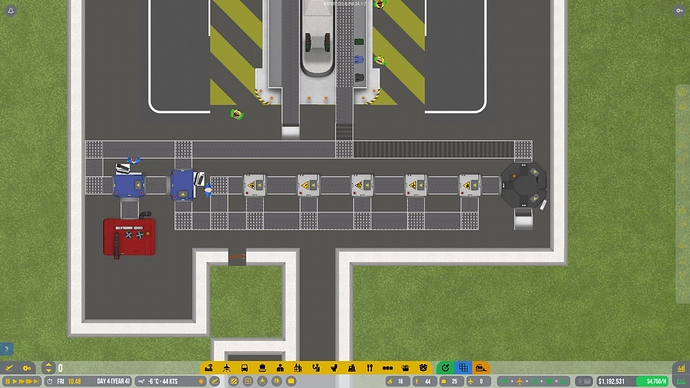 To ease the confusion you don’t need many of the tilt trays, you can just allow the belts to connect. If you can send a few more scree shots of the zoning too. If everything is correct send a in game bug report.

Thank you! Didn’t know that 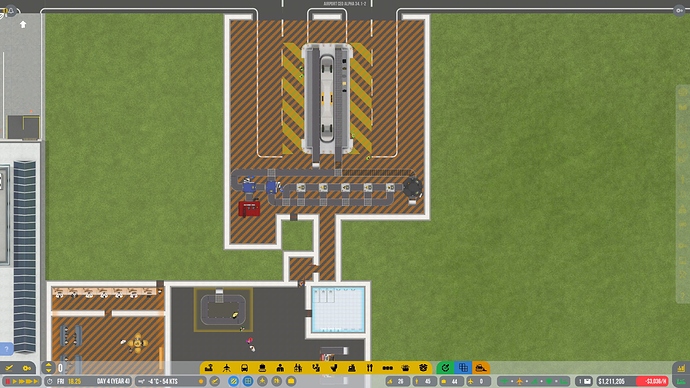 For false positives (cigarettes etc) there’s one mistake: After the 5 2nd tier scanners, even the “green exit” will still send it to manual scan. Instead you could send that directly to the baggage bay.
For the false falses (guns etc) probably a reason could be unqualified staff, you might want to check the quality of the two security guys at the scanning stations.

Why I did everything directly to manual search is because the 2nd tier scanners also accepted guns/explosives…
The guards is all topp trained.

I honestly think this is just a “flaw” with the update. Many others have had the same problem.

I have the appropriate baggage scan setup, I have top-trained security, I have an adjacent staff room and bathroom, plus I limited their shift time on the manual scan machine to just one hour. They still let contraband through and/or destroy innocent baggage.

There’s no way around it right now, as far as I can tell. Hopefully this is something that is patched later.

Please bug report all systems in which this happen, looking through the reports we have for Alpha 34.1-X none of the mention this issue and I cannot replicate it myself. So I want to take a look at your setups and see them in action and see if I can pinpoint the problem!

Let me know the bug report number here id you do report it.

Apologies as I wasn’t even sure if it was a bug originally, so I didn’t report it (until now). I considered it possible that was intentional design. I have since reported it under Claim #ACEO-21528. I’ll include all my relevant pictures here, as well, to detail what I’ve encountered. Though this is just one example - I’ve had the same problems at a different airport, as well.

First here I’ve included my overall baggage layout. I added arrows so you could get a sense of movement. My check-in areas merge to the central scanning area, shown here, which includes nearby break rooms for security staff only and a restroom. Security operates on a one-hour shift. 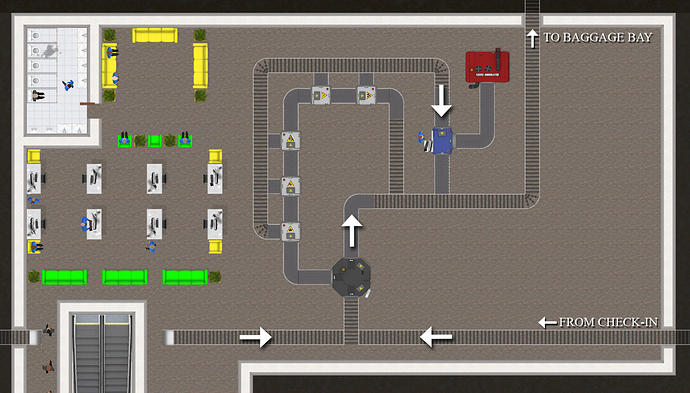 Next you can see an example of a suspicious or rather scanned contraband bag that has been cleared by this security staff to make it to the plane. We can see it is clearly guns that have made it beyond the manual scanning machine. 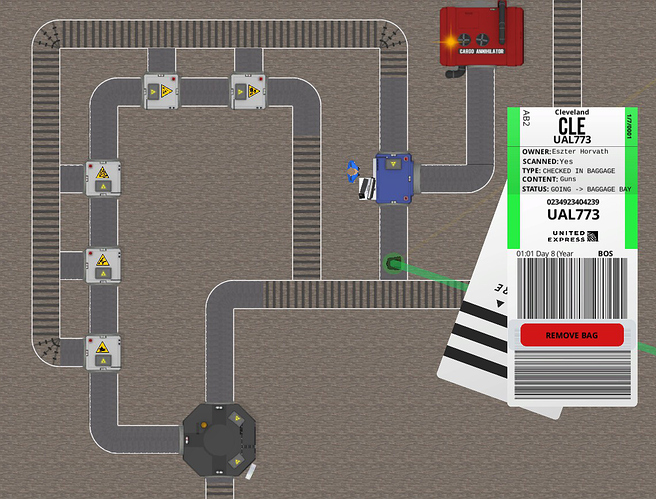 This is from an unrelated incident, but nonetheless shows that other packages have indeed been cleared despite the security setup and function. 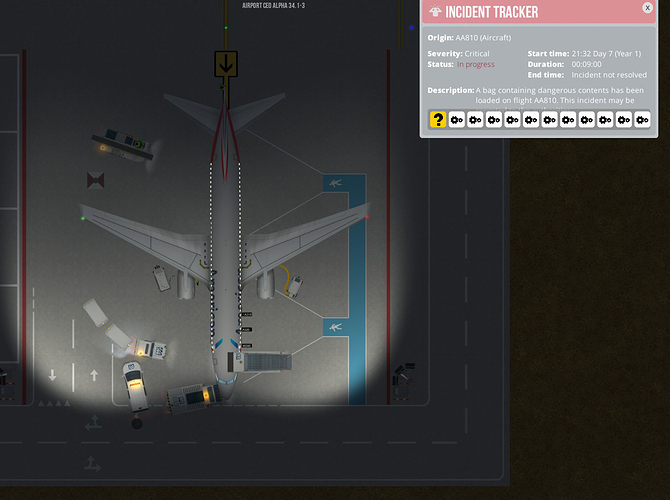 Finally we have the actual notice that suspicious items have made it onto planes at my airport despite my best efforts.

If there’s anything else you needed, please let me know. I was hoping this would give a good overview of what I’ve experienced.

Technically it should/could be possible that PAX take ‘dangerous’ goods like guns on board of a plane because they need it for work, sports, etc So if they have the correct licenses and permits it could well be that a security officer will grant that bagage access to the plane. My next question is then, A if it was allowed by the officer who are the bagage loaders to decide it’s suspicious, B how do they know it is suspicious as they do not have scanners and do not have Superman eyes I presume… All in all it’s a bit weird how that all works.

Also more info would be nice, like if the they clear it, it should add a label from security saying it’s cleared for flying.

There should be a separate Claims section where passengers have to declare large amounts of money or guns or gold.

Good to see that I’m not the only one!

I would agree with win_win that if dangerous goods have to be declared, it should be under a separate security line away from the scanning machines (and you certainly shouldn’t get fined for those things, nor would an airplane have to declare an emergency). Guns were just the first example I observed. I’ve seen all categories pass through.

Don’t forget it’s a tycoon game, not a simulator

But could add a tycoon aspect, as carrying ‘special goods’ will be charged separately…

I would disagree I feel like we can have a small booth which is pre-made that we can place down, to where passengers can declare there large items or valuables. I don’t think this would be to on the realistic side, but I can see what you mean, it has little purpose to ACEO.

The small booth will not be a problem, but the vast amount of lines of code to distinguish big bags from normal bags and all the PAX behavior around it will

I can see what you mean. it will have to make another separate category for those specific items.