Can I assume this is the correct use of bag scanners?

I guess the system is not modelled to be perfect (like real life) but i’m finding a lot of contraband items being picked up by 1st scanner only to be given the ok by one of the next 5 or the final manual scanner.
A lot of organics, explosives, money, not being picked up by first scanner just go straight on to the cargo bay with no other checks.
Avgas & gasoline regularly get through the scan process though may sometimes be caught by the first scanner they are then passed.
All this leads me to believe either my setup is wrong or the scanners aren’t very effective?

I’m still searching for the right order myself, but I believe this is the idea,can be completely wrong.

So al rejects get a double check.

@Sprool I think the issue with contraband getting through has nothing to do with your scan setup, it’s more just what the game perceives to be contraband. It’s just because the game randomly assigns a contents to each bag (which is in itself not realistic), so whole bags of jewelry etc. enter the system. I think the AvGas etc. is just an oversight.

As to what the correct order is, at this point it doesn’t really matter since there is no in game penalty. But do the bags go through all 5 specific scanners?

@Patje89 I like your idea of double checking all rejects! Does the system cope with lots of bags though?

@daniel My current setup allows each bag to have 7 chances of being let through, all bags caught by 1st scanner are directed in series through the 5 different specific ones in order to catch the goods in question. Rejects are triple-checked, first by the specific scanners, then by the manual scanner. I’m thinking @Patje scheme joining scanner 1 and 3 together, with the 5 specific scanners separate, might be a better option. However, if anything fails on any of the 5 specific scanners, they should not need a manual recheck, they can go straight to destruction.

Still tinkering with baggage scanners. I know, there’s no reward/penalty as yet but it’s WIP for later.
I’m looking at 3 main systems, as per diagram attached.
First scanner is the general belt scanner, then there’s the bank of 5 specific scanners looking for organics, guns, money, drugs, explosives. Finally the manual scanner for closer check of anything suspect.

I like the setups you have made and there are more. The problem is the lack of information on how the scanners behave, do they have a failrating (false-positive). Or should work in the future.

I think you missed these options.
Because is it even necessary to have all scanners?
Just to give it a thought… 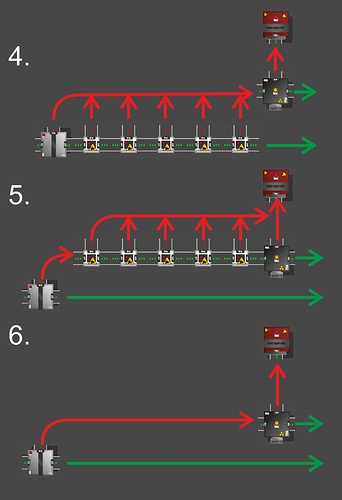 Just chiming in really quickly here to say that baggage content type and threat level is not correctly simulated. Will have a look at this as soon as possible.

The trouble with No. 4 is that if a bag has been singled out as a specific threat I don’t want the manual check putting it back on board again.
No.5 is replica of 3.
I can see maybe a stripped down system like no.6 working well up to a certain airport size, then getting access to more complex systems as the game progresses and you gain access to more resources

Well there are no limits on designs but the problem is about game engine. For example look at this design I built. It supposed to work but due to belt and scanner issues it doesn’t work:

Every accepted or rejected baggage are scanned by level 3 scanner before leading to bay or destroyer so that it becomes 100% that, that baggage is safe for airplane or not.

@Sprool Number 5 is not a replica to number 3.
In number 5 the rejects get destroyed immediately and correct once get a manual scan, opposite to number 3.

@EG0611 I believe that for now, as Olof says"…is not correctly simulated.", all behavior of the scanners seems to completely at random.

The problem with your design is intersections, as the bag does not get a pathfinding to next scanner, but a pathfinding to baggage bay, any scanner on that route will be taken in account. Only the baggage destroyer seems to be able to destroy the path, so the “bag” does not do anything with the status “rejected” it just moves on a different traject with still the same destination as far as I could test it. Not sure if it is correct.

The only advice for now is just to place the scanners as it feels right or looks nice from your perspective as long as there is no correct simulation established.

The organics, guns, money scanners would be more useful for inbound international luggage when customs and immigration is implemented.

So of course I could implement that now - all inbound flights luggage is checked for contraband and if I find any, I send it to the cargo destroyer! The PAX won’t get their bag in baggage claim.

There should be a bag that is loaded with “Guitars” that is destroyed every time. Thanks United.

Great observations. I will adjust my scanning going forward to have those items customs cares about moved to the incoming baggage and omit them from outgoing. Not sure why I never gave it a second thought.

Yup, that’s exactly what happens at the Airport I work at as well…
There is no way they can do it en masse.
There have been a few occasions that customs/MPI have decided to do full checks on a flight, and the backlog is horrendous… (That’s why it doesn’t happen very often.,)

I like the 3 options and descriptions! I use the 3rd for all my scanning. I never thought to use the other options. Thanks for the diagram and ideas for other options! Cheers!

Here is my setup : 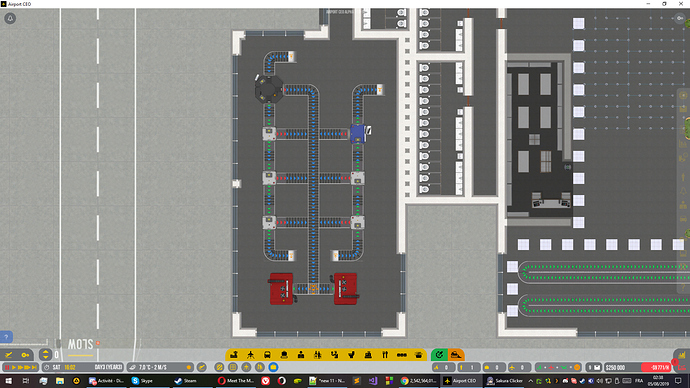 I like the idea of all bags being scanned with increasing level of security and any rejects being a definitive illegal thing, because if we put additional scanner after the rejected to double check if the content is indeed illegal, this mean that we are likely to not use higher security scanner for the clean output of the level 1.
Which imply that all baggage considered clean by the level 1 scanner might just require level 2 or 3 (specific or manned) scanners to detect the illegal content.

To make sense as a gameplay mechanic, illegal contents should have 3 level of detection related to the 3 level of scanners, any illegal detection should actually go through a manual search station to check the content of the bag (no need to push things up to police and stuff like that though) which can help dealing with false positive, as any false positive should result in a pissed off passenger (we destroyed his bag after all) resulting in reputation loss.
The higher tier the scanning station, the more time the scanner should take to scan it, after all a guy can’t analyze as fast as a computer, but might actually by observing carefully see thing that a computer can’t detect.
This would make setup with potentially multiples identical scanners (for throughput) a necessity if we don’t want slow baggage route, which would encourage the use of tilt tray and more elaborate setup.

Some good pointers and ideas. For the next game play update (after Alpha 32) we’ll make sure that scanning baggage has an impact, along with other game play factors.

I like the idea of all bags being scanned with increasing level of security and any rejects being a definitive illegal thing, …

You must be a bureaucrat.