I’ve spent rather too many hours this weekend getting to grips with the game, and am finally starting to understand how the baggage screening works as well as the tilt options for sorting bags to differnt cargo and collection zones.

Forgot to add, sometimes (well, often) setting up belts theres a block where a bag jams the system up for no reason. I find I have to save, exit then reload the game and it cures the issue. I had 3 or 4 baggage carts plus a fuel tanker all stacked up on eachother jamming their progress till I saved & restarted. Favourite old IT trick, turn it off then turn it on again solves 90% of issues…

LOL, yes that’s a good o’l IT trick I use myself.

Your scanning arriving baggage too… wow. I just send that ASAP to baggage claim.

It does take some head scratching at times to work it all out I agree but you’ve down a very well thought out screening area. Tilt trays do have their uses I agree

I’ve started sending outgoing baggage down from the top leaving the bottom clear to go straight to clams making for much shorter baggage belts.

It’s turned off for now as I’m redoing the screen area. 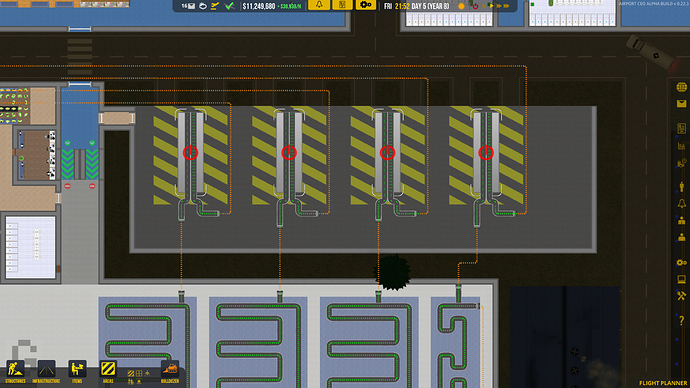 That looks a lot more efficient than mine! I guess you can locate the cargo areas near the departure gates, or locate them near the baggage reclaim halls, depending on your layout…

Yep, the screening area right now is behind the check-in desks. Given checking is a lot longer process than claim, I let the departing luggage take the longer route.

I realised I didn’t have to put them next to each other. That’s what belts are for

I’ve not seen anyone route baggage like that either. They send the claim baggage around the bay which I used to do as well, till I planned this lot.

It is very much a plan, plan and plan process.

If you want to see the whole design, its Wellington International on here.

This is the most efficient arrangement for full bag scanning I can come up with, but are the scanners in the optimum order?

Your idea to have shorter ‘suspicious’ belt is really nice for a lack of horizontal space, I really like that, but it makes the mis-scanned baggage lane slightly longer.

For a bigger airport you will see how slow the first scanner is.
Baggages are queuing. I remember I had a tilt tray to forward baggage directly to plane, without time wasting scanning.
For now I have 4 separate scanning rooms, but what @Rubble did is a masterpiece

Well I’ve been doing some rebuilding of the screening area.

Turns out, baggage scanners are actually needed. Just relying on the specific scanners is not enough. Darn. Thought I might save $50 a month.

@radzi00 Thank you for your kind words. You have no idea how long that took to plan. I’ve pulled it all out and redeveloping it. The end portion will more or less be the same. It’s the input section that will be looked at. I’ll be posting on the build page when I’ve decided what I’m doing.