I’ve been experimenting with baggage setups and trying if there are any better ways instead of the Tutorial way of doing things. My idea is to recirculate baggage, which would mean that baggage only ever gets destroyed if it fails all 3 Tiers of scanning. The main thing I need to know if this works or not is how does detection work? Is there a small chance that a normal suitcase gets picked up as containing illegal goods and vice versa? And is this independent every time it gets scanned?

I’ve ran a quick test on a single piece of baggage and the results tell me that it doesn’t work the way I hope it does:

This result meant that the baggage was recirculating the scanner forever and ever, which of course is no use. Also it doesn’t prevent false negatives on the T1 scanner.

I’d like to know how baggage detection works and if you guys have any better way to prevent dangerous goods on my planes!

edit: as I can only upload 1 screenshot I can’t show you the underground level. The T2 and T3 “pass” lines loop back to the input of the T1 scanner again. 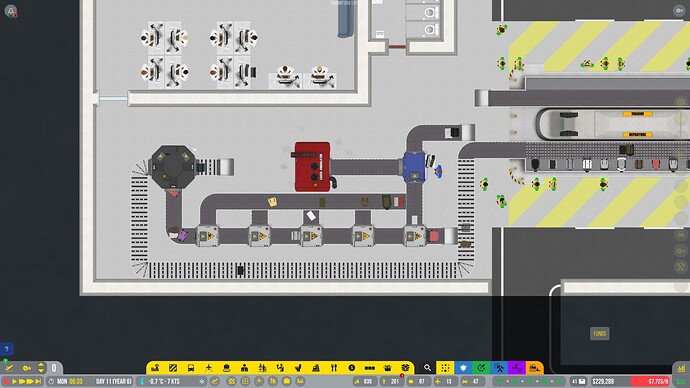 I use a similar system as you, but only my T3 pass-through-baggage recirculates. Additionally I built a T2 line after the T1 passthrough. By this i noticed that there can occur false negative baggage in T1.
In my case the baggage doesn’t recirculate forever and ever. After 3 or 4 circulations it passes the T2 test and proceeds to it’s target area.