As I recently played with the game again (and at the same time put around 40 hours building my old airport from a few moths ago), with the numerous new stands I started to use the autoplanner. However, from the start of its use, I noticed that every once in a while (between 12 hours and 3 days in-game), it puts 2 flights at the same stand at the same time, at least 2 hours after it’s planned departure. You can see here at the stand A3 on the screenshot, instantly as I noticed that a flight came in 3 hours late I stopped the game and screenshoted it, as it put the flight juste a minute after the picture. This causes at the stand between 2 and 12 hours of delay for multiple flights, causing a remarkable loss of money with 2-3 stands happening, and I can’t change the following flight, since they are already en route.

I am using the Real European Airlines and Real Catering & De-icing mods by dubinek.

Is it intentioned, a bug, or has to do something with the mods? It’s really bad that I have to always look for the delays when I’m building of doing anything around the airport. And with 20 medium and 4 large stands , planning the flights manually is a little bit complicated. I have a lot of ideas to do at the airport still, and other airport layouts as well (I became a bit addicted of the game again

), so it really ruins for me the joy of building.

Thank you for your help. 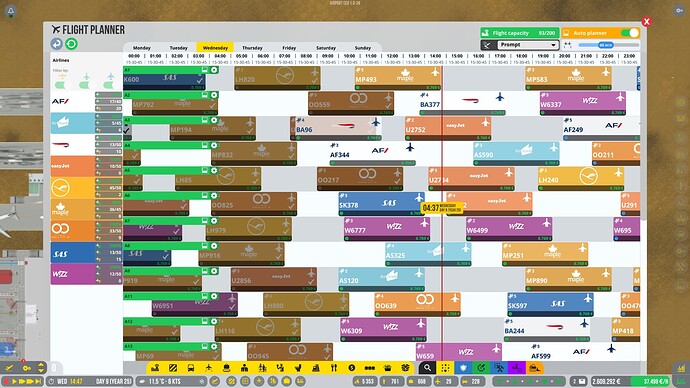 It’s not because of the mods. Except your VRAM is full because you have too many mods or too big modpackages subscribed which fill the entire VRAM.

What are your system specifications and how is your CPU doing while running the game?

It’s interesting to hear how many have issues with the overlapping flights. I do use autoplanner all the time and never get that case. My theory is still that bigger lags because of the system performance cause this.

I don’t notice any bigger lags, no matter what time the game runs (1-3x) I always have at least 25 FPS. Rarely when moving the camera a lot it freezes for a second or less, but this is due to the fact that I changed the size of the map in the json file to build all my ideas left. Regardless of this size change, the problem occured even before. I use the “Fast” settings, but even if I change to “Fantastic” I still have at least 20 fps where I have the most passengers, and still no big lags.

We are aware of this issue and are looking into a problem, most likely there’s a leak somewhere in regards to the system’s multi-threading. Hopefully we can have a fix out as we return from summer vacations!