ATC: Line up and wait

I noticed that aircraft wait at the holding point of a runway until the previous aircraft has completely left the runway. In peak hours this causes waiting lines of aircraft waiting to take-off. In real life this is solved by having aircraft lining up on the runway to wait for the other aircraft to clear the runway.

Line up and wait shortens the time that aircraft need to take-off by having the taxi-on-runway time at the same time as the take-off of the previous aircraft or the taxi-off-runway time of the landing aircraft. Implementing line up and wait in ACEO will increase the capacity of the runways so that we can build a more realistic amount of runways instead of having 3/4/5 runways for 20+ gates.

I completely agree, it would be very helpful indeed and improve the efficiency of the runways. However, I think at the moment the game has no mechanism to estimate time between an aircraft taking off and say an aircraft that is also waiting to land behind it. It’s the same reason a plane might hold on the taxiway for a plane that has reserved a path all the way from the other side of the airfield.

Yeah, I know. They need to improve the ATC mechanism. But hopefully they will take all ideas on the forum in the back of their head while designing the new mechanism.

When I first started out, I had 2 runways and followed some of the holding points based on what I saw others doing. The ATC does have some method to the madness and I tried multiple things but what seemed to work for me is this…

So while it’s cute to have these little thingy’s all over the place, the reality is, if there is something in the way of the airplane, it will stop, etc… and the more of these thingy’s you have, the more confused the airplanes seem to get… in my experience.

I now have 2 runways on each side of the airport. Currently, my outside runways are for departures, the airplanes are led to … and my arrivals are my inside runways which lead them to taxi to the concourse. The only issue I have is that sometimes, the airplanes land on the opposite side of the concourse they will need to access. I have had to put 1 hour between flights to allow for taxi time and HEAVILY monitor GE flights (I usually only turn them on from about 5 PM untl 9 AM; they cause minimal damage and park overnight to rake in cash).

BUT, like you, it seems there must be an order or priority at least given to either arrivals or departures and during peak times, there is a lot of waiting around for aircraft to maneuver. Again, it is quite realistic, but very frustrating.

I was about to create a new suggestion, but since it has already been suggested I will just ‘‘up’’ this thread.

Even though it is old, the issue is still valid. Queues near the runways are very long and it gives a sence of a much larger operation than it really is. In the real life as well, the runways are the most limiting factor of a capacity of an airport, but I feel that runway usage in game could be improved. Line up and wait behind the departing or landing traffic would certainly reduce queues and add extra realism to the game.

What do you guys think? Let’s vote!

I going to suggest the same thing - glad to see others have noticed this too.

There is certainly scope to improve the runway usage logic, and having departing aircraft enter the runway before being cleared to depart would certainly increase runway throughput (particularly for runways set to take-off only)

I would go a step further.
Not only the depature logic could get an overhaul to make things more efficient.

If I am not mistaken, inbound flights only land when the gate is free / the previous gate user has left via a runway.
In reality this is not happening and most people already design their taxiways (mainly for cosmetic reasons at the moment) in a way that there is more than one route for runway-gate-runway.

How about having aircrafts land and hold certain positions while waiting for an available gate?
Back-up stands would come in handy with this too.

Just throwing it out there…

I have massive issues with taxiing delays, too. I also tried out a lot of layouts, but no success…
Since i read a few comments about how

things are or how to

add extra realism to the game

My first thoght when I think about the “taxi-topic” is not the realism, but the in-game “fun”, respectively the balancing: I watched how planes move and how long they need for specific steps, and my result is:

Let us take a Medium Aicraft with a turnaround time of about 4 hours. 4 hours is a very long (and unrealistic) time, which does - in my oppinion - not matter as long as it fits to the amount of time I need within the game to process a plane.
The real problem in my eyes: a typical aircraft does need abot 3h to taxi to its gate, then the turnaround goes on very efficient, so the massie delay is catched up and ready to pushback on time. And then it stucks there for another 2 hours, while I get massages, that the next plane cannot land.

In my eyes it would be okay, if the planes would need about 1/4 of the turnaround time (about 30 min) in average to get to their gate and push immediatly when ready. But very often they do not move at all, although there is enogh space and free taxiways. In many cases they won´t move, even if the only other plane is at the other end at the airport; they manage it to block each other anyway…
And as far as I can see, none of them has a priority to move, so both are waiting for each other for a long, long time…

quite a long text, but to sum up: taxi and take off times don´t have to be realistic, but balanced to the turnaround time in total. And we need a better priority system, that airplanes will not block each other meaning no one moves at all 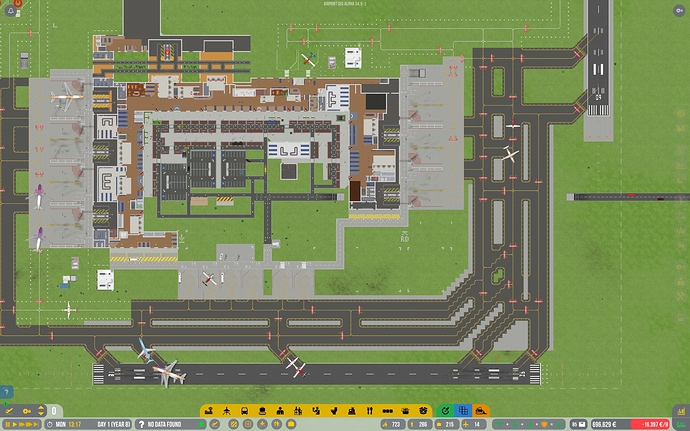 Try restarting and/or reloading your game.

In the F10 menu you can also cancel all plane actions by clicking ‘Reset aircraft paths’ maybe that helps?

Also the taxiway layout seem to be pretty complex with all the one way signs, maybe that will also confuse the airplane paths as they have to calculate every new one way sign they come along when moving around. As a test you could remove all the one way signs and only have them on your runway entrance/exit and see what happens.

Hi Puma, hi everyone else reading through the commets,

I added all those one-way signes due to I got used to it in earlier verisons of the game, ´cause the planes allway stood nose to nose to each other. To avoid this, I made each taxiway “one-way”.

But now as I read through the comments I tested It like you saied @Puma. And it worked out perfectly fine! As I deleted all the signs, the planes move very fluently and without delay or blocking each other. They don´t run into each othern, nor stucking nose to nose. I don´t what actually happend, but the developers did a really good job! None of the planes needs more then 30 to 50 minutes to reach its gate, which is - in my opinion - very good;compared to the 4h turnaround time. Thanks for your help within the forum and thanks to the great work of the developers!