Arriving baggage does not go onto belt

My departure baggage belt works but the other side of the belt the arrivals never gets loaded with baggage the cars with the unloaded baggage just drive around the baggage belt but dont drop it , can get help please? 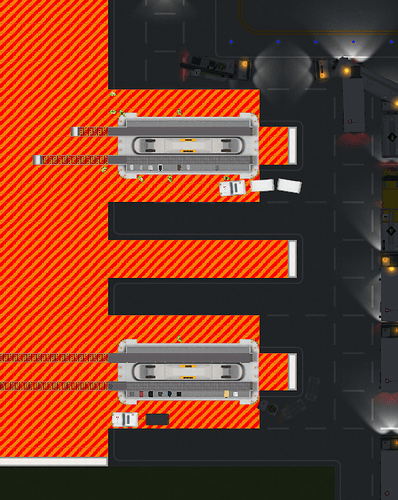 Not 100% sure, but I think you cannot connect high speed belt with the baggage bays.

Not 100% sure, but I think you cannot connect high speed belt with the baggage bays.

Nah, I do it exclusively.

@Silkren Have you connected the baggage bays to baggage claim areas? See screenshot: 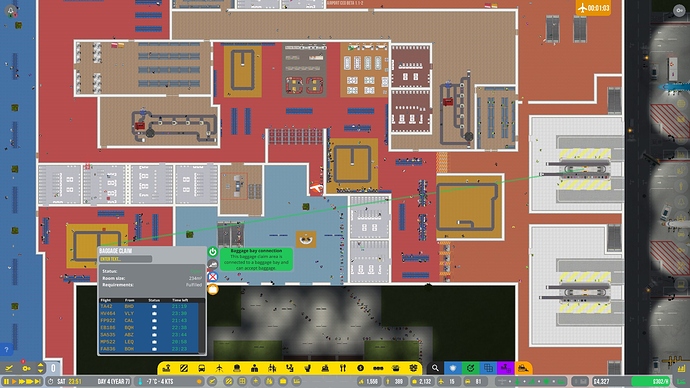 Pharma is onto something. You can look and verify if any airplanes brings baggage in the flight status monitor. If none of them brings any baggage, it means you don’t have a working arrival part for your baggage. Such as, as mentioned, no connection to an active baggage claim.

I connect High Speed to Baggage Bays without problems.

Such as, as mentioned, no connection to an active baggage claim.

It’s very possible, since baggage claims can be opened just fine without connecting to baggage bay. You may miss connecting them for example when they were built before baggage bays.

Not sure if you still have this issue, but i experienced the same.

So, what happened was that every time an airplane arrived, the baggage trucks would drive to it, empty it, and on the way to the baggage bay they would mention a spell and puff baggage truck empty, and go back to garage.

Leaving a lot of frustrated passengers - at the same time, baggage would be droppet in the baggage drops, go to the baggage bay, be loaded onto truck and the same again, the wizards would mention the same spell causing the luggage to vanish.

So changing the setting to delay and change the time slots allocated to each plane solved this issue for me.

Good discussion here! Has @Silkren managed to fix this issue?

I’m still running into issues with directions of the belts being changed from what I wanted to a different direction once placed. If you lay down a long line or complex system, the direction changes can be missed.

Please report this save as there could still be cases that we missed to verify and correct.

Please report this save as there could still be cases that we missed to verify and correct.

@Olof, @Fredrik Me? If so, I couldn’t submit that one. Altered map 1300x1300, and they’ve already been corrected as the build out has progressed. Combing through my brain on them though… I’m wondering how many of them were related to the use of the copy and paste, which has already been identified…lemme. There were a few, but then I opened the full build template map, unaltered and went to work. All of the pics below are visible in the error map I sent. Baggage belts are quite broken.

Placement of the hoppers before

It flipped them.
Now with 3 belt strips coming off the end

image2226×1088 586 KB
and then… also, with a shot of what happens when one places a single belt next to the hoppers already in place.

Initial set-up with intention to place the belt in the green position after placement of hopper to show that it will swtich the direction. the belt will be placed.

Baggage bays - same behavior. - Work great when placing a string of them, If you place a single, like on the right, both terminals, the ones not attached are the directions I was intending to place them, they spun themselves

The error that was reported a while back (probably a month) where @Olof had asked me what the error messages were all over the passengers on the huge and modified terminal have been corrected. The baggage loaders are no longer getting stuck spinning bags internally but the switching directions like they did, still there, only now predictable and repeatable

image3156×1076 1.2 MB
These worked flawlessly, only because the placed strips were longer than 2 chains… then I got nutzo and really started to play

I’d say this is the problem, especially in situations where people try to make really tight configurations and only drop a single belt. The security checks seem to not be a problem. The direction the game chooses for the placed belt seems to be based on the default direction they expect luggage to travel. Take bags dumped off a baggage bay onto a perpendicularly directed belt, while it may be set to travel left or right once there, the bay still expects the baggage to advance “forward”.

“The direction the game chooses for the placed belt seems to be based on the default direction they expect luggage to travel.” - Yes this is true. Which is why you get the expected behaviour. It is hard to look at these and change anything because it is actually not real cases.

For example here: Baggage would never be able to travel upwards so the system assumes you want to connect it downwards. It only looks at the placed belt and make an assumption based on its neighbours. Which in this case is logical to connect downwards.

Here, when you drag a row the same piece now firstly will look at the conveyor belt in front as that was the placed direction, so it assumes you want to follow that same direction.

I need to see some actual real cases of what you are trying to build before I go changing stuff.

Yes this is true. Which is why you get the expected behavior. It is hard to look at these and change anything because it is actually not real cases.

All of the images submitted were from a brand new build, repeatable, and are not what I expect to be built when I placed the baggage belts down in a planning stage. I’ve done baggage belts for a while, I know what to expect, I know where errors come in in the past. I would not plan in a build to go back and have to insure that all of my single belt place holders (not yet built but still Q’d up for the construction) which were then extended from that single location outward to flip directions.

I need to see some actual real cases of what you are trying to build before I go changing stuff.

you miss understand what the top image you show is showing. The belt that is “placed” had the arrow directions on it like the one on the left. It was placed before laying down the strip on the bottom. When I laid the strip down, it flipped the belt to the direction shown. What seems to be occurring is the direction flipping without our awareness that we did it. These were placed with the construction simulations turned off, so the feedback was immediate. But if you add in the delay time of laying something out and something being built, you’d miss it. That, and the direction flips with placement of the construction Q items. It only happens with single length belts though.

image1719×624 209 KB
This would be a quick model of what I’m actually building/doing. It’s flipping them. I would not expect the baggage belt to do something completely different than what I told it to do. Perhaps, it’s just me. God knows I’ve screwed up enough airports in this game. But I’m demonstrating how I play the game. Sometimes I place single belt place holder and come back to them to build out that section. I also don’t think I play this game in a Tycoon manner. I’m more of a Sim City approach, build the monstrosity, (perfectly of course) and then hit the go button. It would appear there are people who play this game completely different. All you need to see is the threads of extreme and single box taxi items, and they build as they go. I don’t do that often because the hassle of breaking down old structures is a huge hassle. Those who play it in a Tycoon fashion, it would seem to me there are fewer opportunities for large scale builds with tiny errors that come up because they’re building their upgrades in smallish fashion. That’s my observation. When people who approach this game in a SimCity (snadbox) style. There seem to be lots of us. New people are posting baggage problems often now. When you lay out 4 terminals, 16-20 baggage bays, 4 different baggage security check-points, ~100 check in desks, and then dozens of stands, etc., errors of construction come in. Just like the ones I post above. Are they our fault, quite possibly, but where I see a tangible problem is when the game result of an action I specifically tell it to do, is not what I told it to do, then that’s a programming/playing mismatch. It’s also why it’s not happening every time, because of the different styles of play, even in the same players.

I had actually thought the error/bug had been completely resolved, witness my statement in the pic second from the bottom. once I built the pic beneath that to see if it actually had been solved, the baggage belt directionality reared its ugly head.

Tangible example of it not being predicted.

That’s all I got. Take it or leave it, the choice is certainly yours. I am grateful for the game you guys are building, and I appreciate the direct response from the developers.

A lot of the baggage issues I have seen recently here are due to user error, I.e. a player has forgotten to do a small part of the baggage process and therefore it doesn’t work.

I get that once you have completed you baggage system and realise that it isn’t working due to one belt being placed the wrong way or you haven’t connected something properly that it is extremely frustrating.

If I come across a problem where the belt is in the wrong direction I just delete it and replace it, no biggie. I also believe it’s the players responsibility to ensure that their baggage system is working correctly and as intended. I agree that maybe the tutorial doesn’t go in depth enough however part of the game is to figure out how things work for yourself.