By starting a new game in sandbox mode, I unchecked animals and emergencies disabled. But yet once in play, there is neither. Is it me doing things wrong or is it a bug?

I’m most of my time in sandbox mode and both works for me. May it didn’t saved the checkboxes before you pressed start?

It would be possible to see if the settings are active or not in the GameData.Json file which is located in your savegame folder. The file can be opened with a text editor. Search for:
"emergenciesDisabled":false,"animalsDisabled":false
“false” should be the correct value when you want them to happen. If it’s “true”, then it’s deactivated.

Emergencies do not just randomly spawn, there needs to be certain base criteria met such as certain projects researched and some gametime having been passed.

Animals too take some time to spawn.

Tested for animals they seem to spawn as they should with those settings. Remember, they can spawn in areas you’re not currently owning as well.

Indeed, it is well marked “True”. I must make a mistake then when I select them in the sandbox mod.
To be clear, do you have to put animals and emercency in green or gray? 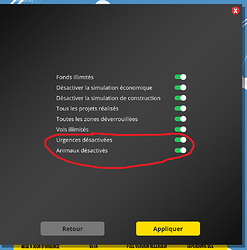 To have then enabled in the game, turn it to grey
To have them deactivated turn to green.

It’s a bit confusing. You have to read exact.

And don’t forget to “appliquer”. May this was the reason why it was not correct.

OK thank you for your answers

I think our design approach for the sandbox options were that “enabled = sandboxed”. Looked a bit weird when random toggles were enabled or disabled for a fully sandboxed game

Are animals supposed to spawn within fenced off territory? In my games I always fence the entire border of the map.
Since version 1.0, animals still cause delays and appear to spawn anywhere on the map. See the three camels (I assume) even thought there are many fences and the entire map is owned land. The in game advice says to fence off the airport, but this does not help. 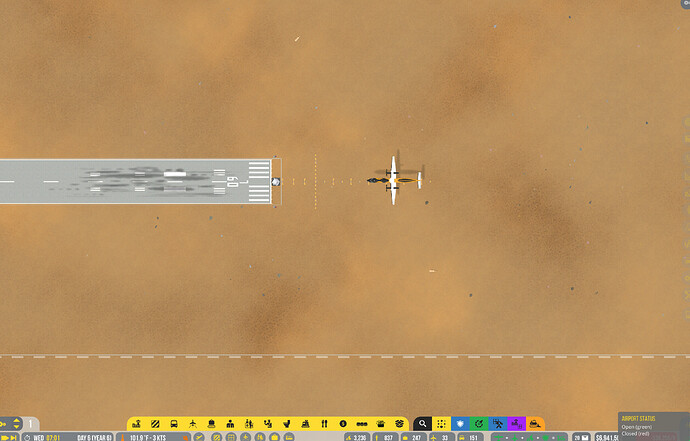 Are you on Default or Experimental? There is a bug in the Default where animals spawn on top of fences.

I also have issue with animals, but I’m playing on sandbox with animals off - but since last update on experimental they started to appear

I bug reported it already

I’m on default. I started putting fences around each runway, but that may have exacerbated the problem with that bug.

If you want, you can try the Experimental Branch and see if it happens there too. There is nothing which breaks the savegame when playing on Experimental.

Are you sure that there are no holes in the fence or otherwise? Should be impossible for them to spawn in the world, right @Alexander?

I have no fence, because there should be no animals anyway as I turned them off in sandbox (I also checked it in GameData.json)

Just to throw in my monkey wrench, at one point I had 12 aircraft that were blocked by animals at one time. Although I am playing in sandbox and have the spawn animals unchecked. That never happened before. (So it was nice to have something different to tackle.

I have my whole airport spammed by animals

Have you tried it on Experimental yet?

but since last update on experimental they started to appear

What if you launch a new save with animals turned off, do they appear for you then? I’ve ran it a few in-game hours here now with that setting and no animals.