was seeing about the 787 he will have a new boarding gate for him more I stopped to see would be good if in the big stand we could put smaller flights like 737, A320 among other smaller aircraft 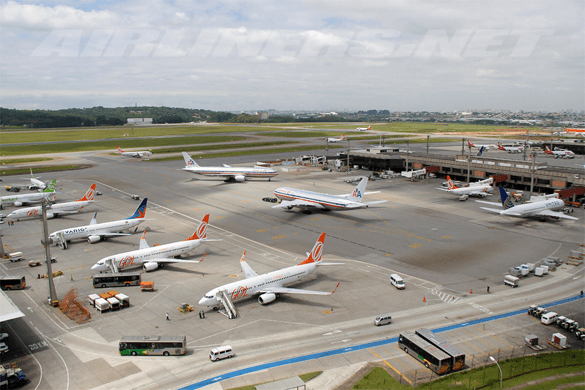 Who knows maybe whole small/medium/large stand system should be changed and users will define their stand size by themselves. (Like how players draw taxiways) A 5x5 stand for 787 or maybe a 20x20 stand for Cessnas

This picture explains so much about the remote stand discussion thing, which pains me at the volume of time spent trying to get them to work… because I don’t use them at all… (I’m from the US)… this simply doesn’t happen in the US. This also explains a lot about how the developers have designed the aircraft stands… we don’t really have that concept in the US either…

These are both from Reno Tahoe 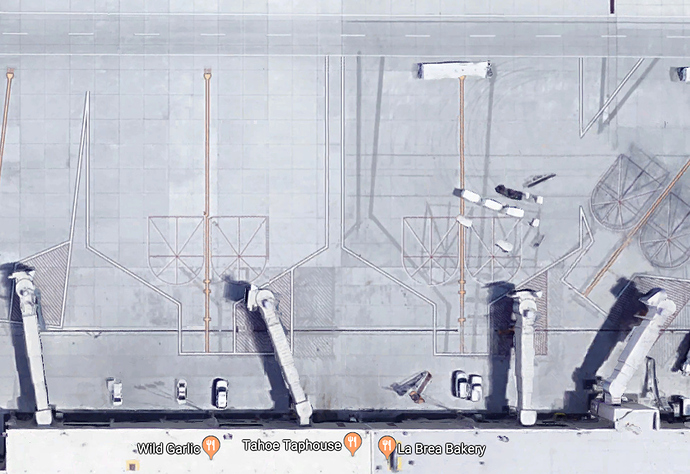 It’s more like… follow this yellow line if you’re a plane… the area right in front of the engines that’s all diagonal lines… don’t walk there… for… obvious reasons… yet they still had to paint it… and then general guidelines for where the wings will be, but even then, they mark that with cones… don’t drive inside the cones…there’s no road traffic in front of the planes like this game uses at all. It makes the planes park closer to the building. All the traffic is underneath the airport or there are garages underneath. The service roads are all behind the aircraft. The safety function isn’t how you enter the aircraft area from the front of the aircraft, but from the rear… You can even see there where they sort of park the equipment wherever it’s away from the aircraft and it’s wing cones for the plane to depart. 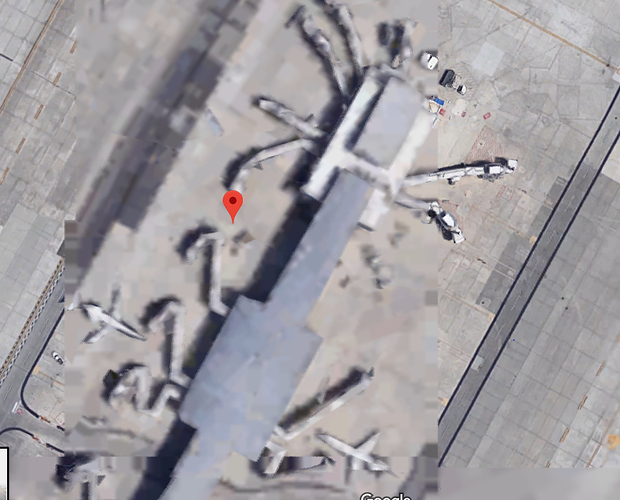 the photo I used in my post? if that’s the name, it’s Guarulhos International Airport Sao Paulo Brazil

Pretty much. Some airports have a designated gate(s) which are just bus stops where you board a bus to take you to the remote stand. I’ve also flown from airports where I’ve gone through a boarding desk at a normal jetway connected gate, only to sent down a staircase and instructed to board a bus.

Remote stands allow the terminal building itself to have a smaller footprint/surface area, as it does’t have to link directly to all the stands. Think how much bigger the terminal in the picture on the first post would have to be in order to link to the stands on the left. Equally, it’s probably quicker to bus the people to far away stands than expect them to walk.

this simply doesn’t happen in the US

Although I understand the point you want to make, I have to say that there are indeed quite sizeable bus-boarding operations in the Continental U.S. as well. Look at Seattle Tacoma for example

They operate a fleet of 20-odd buses to board passengers.

I think it would make sense to allow medium aircraft at large aircraft stands. I mean, why not?

They operate a fleet of 20-odd buses to board passengers

But they will still build the most odd shaped ramp walk-way out into the tarmac and attach planes to it before they’ll service these by buses. I guess thinking about it, there are bus operations around, but not as a rule. They’re more about dealing with large travel distances between terminals than remote stand configurations. like those seen in the pic from Brazil 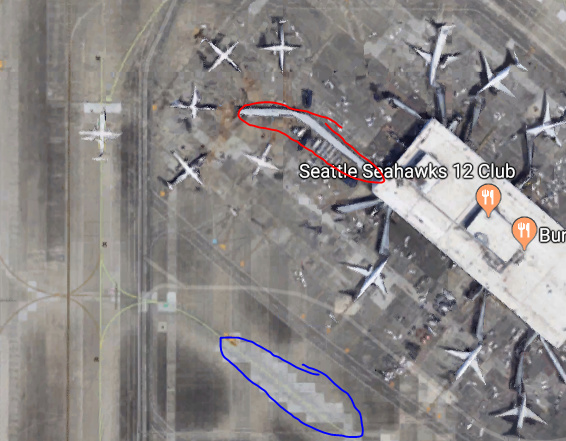 Although I understand the point you want to make, I have to say that there are indeed quite sizeable bus-boarding operations in the Continental U.S. as well. Look at Seattle Tacoma for example

They operate a fleet of 20-odd buses to board passengers.

Do they use that for actual plane loading though? Best I can tell they use the buses to shuttle passengers to the satellite terminals which then are loaded through jetways like the main terminal. They have a few stands that look like they are accessed via the ground but you don’t need to bus to the actual plane to board. Philly has a bus system as well, but that is for travel between terminal F and the first three. They do that because the distance from terminal A (which hosts international flights and American Airlines flights) to terminal F (the regional terminal run by American) is a little over 0.8 miles (1.35 km). So Gate F10 (I think) is where a shuttle bus picks you up and takes you to one of the other terminals. But a system similar to what is common in places like Europe? I don’t know if there are any major airports in the US that have that many stands that you are bused to and load from the tarmac. I could obviously be wrong, but I’ve just never seen it.

I ran into this at Heathrow the only time I’ve flown outside of the US. My gf and I waited in a less busy area than our gate was because I wanted space to move and not be cramped prior to an 8 hour flight. Our gate was on the second floor and we sat at seats for a gate on the ground floor. The ground floor gates were for the remote stands or for flights you boarded from the tarmac. There was a small group of people that came through the one gate we were at, got on a bus, and drove off. I think in America we typically use the ground floor for airport staff and storage. But with remote stands in Europe they use at least some of it for gates to get to remote stands.

Do they use that for actual plane loading though?

As far as I am aware they actually board passengers by using buses.

There is also an article in the web: https://www.bizjournals.com/seattle/news/2015/10/29/exclusive-space-squeezed-sea-tac-to-use-buses-to.html

According to the article there are only three buses. Last time I spoke to someone from SeaTac they were speaking about more than three. Maybe they bought some extra busses in the meantime.

Yeah, just found that they opened the Concourse D Annex which buses people out to 6 hardstands. It is supposedly only a temporary solution (if you consider upwards of 20 years temporary) until they can build additional gates and to deal with current congestion at the airport. They are opening an additional 8 gates at the northern satellite and are in the planning phases to re-do the international terminal to add 8 there too. Doesn’t change the fact that you are right and they are using buses, just doesn’t sound like they consider it a long term solution like you see in European airports. Thanks for that though; gave me some interesting things to read.

At DCA (National Airport in DC) gate 35X is essentially a bus station built beneath the other normal gates to American’s small planes, until they build the new terminal that is.

At IAD (Dulles), and a few other airports, they had these crazy “mobile lounges” (they still use them for some transit between terminals) which were essentially very tall, wide buses which drove you to the plane and had a little jetway type thing. 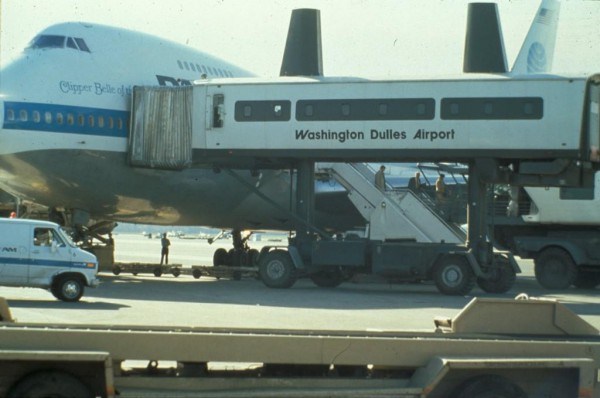 You can actually build that in AirportCEO

You just need to save 1 tile of foundation for jetway

You just need to save 1 tile of foundation for jetway

Do you have an image to explain how that works?