Like many of you, I am finding this game VERY interesting. It was difficult to get the hang of at first, but only in trying to mix strategy and vision (how best to operationalize what I wanted to do in phases). I found MANY of the YouTube guys like NoSlack, Keralis and ExactChaos to be extremely helpful and funny as they reacted to the nuances of the game In fact, I watched their videos nearly a week before I purchased the game.

For me, I like to ‘save and continue’. As you can see from my screen shot, I am in Year 8, after about 32 hours of play since October 2nd when I began. I put in some work, then SAVE THE DAY. The next time I go in, I make changes and add and if everything works out and / or improves, I SAVE THE DAY again. If not, I just go back to the previous save. They are all more or less the same foundation, but evolving from the next. This screen shot, again, is what I have so far. 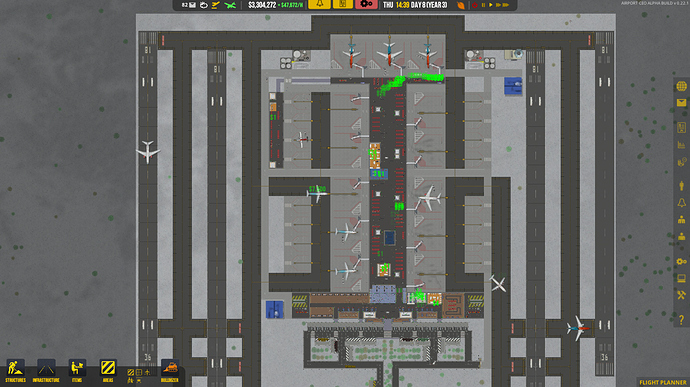 This is inspired by Hamad International Airport as well as pretty much any airport shaped like this such as Hong Kong International Airport. Of all the airports I have been too, I like these the best. I have filled up the space as much as I can as a trial run and having completed all the tutorial elements, ironically, when I got the update yesterday, I had already been classified as an ‘International Airport’.

Again, this evolved over time, for example, originally I only had 2 runways and then added 2 more. Getting the taxing right was VERY challenging. It works perfectly now and often have simultaneous departures (outside runways) and landings (inside runways).

At any rate, there are 10 Check Ins for medium aircraft that serve 13 gates in Concourse A (the concourse attached to the main terminal) with it’s own dedicated baggage bay (EAST) and 4 Check Ins for small aircraft that serve 4 gates in Satellite B with it’s own dedicated baggage bay (WEST). I didn’t overdue it on restaurants and shops but those I do have serve their purpose, and make LOTS of money! One trick to get the largest contracts as to build the ‘room’ virtually, so it extends out farther than my walls to capture more passengers and offer ‘people watching seats’.

I try to organize my flights to gates, for example, I will assign Air Strada to A1, A3, and A5 where as NAS gets A4 and A6. While I used to try to squeeze in 4 flights per gate per day, the taxing and service vehicles need a little extra time to get around so I limit myself to 3 flights a day with an hour between flights, staggering all flights at all gates. This screen shot was peak time with 8 aircraft at the gates and 3 aircraft departing with 3 inbound. It was cool back at version 12 (and this is version 15) to have all the gates filled; but that was before I added baggage handling, so things got kind of hectic. One thing that REALLY helped beyond version 12 was that I only accept (‘always’ enabled) general aviation flights in the evening. I am still working on the timing, but the idea is to allow them to come in and just park all night and wrack up cash and then kick them out in the morning (you don’t have to go home, but you can’t stay here).

Not much more I can do except make more improvements to overall workflow, analyze my staffing deployment, rework office space and staff rooms and possibly add another satellite concourse (adding the one I did really altered my taxing so I am still monitoring to see if it’s effective and whether I can afford another one on the other side). Not to keen on changing the flooring but may update the seats to match the airlines… not sure.

I am excited about future developments as we all have great ideas about to make this game even greater.

Looks very nice. Got any up close screens of the terminal and baggage handling?

The difference between the West and East baggage bays are as mentioned, the EAST serves the medium gates. To help with baggaage flow, I put in a tilt tray that will randomly move some bags through to a single screener rather than the other 4 machines for more specific screenings. I did everything except money and food. I struggled to fit in food scanning though I may introduce it for incoming bags as well as a single heavy duty screener. There’s just not enough room. 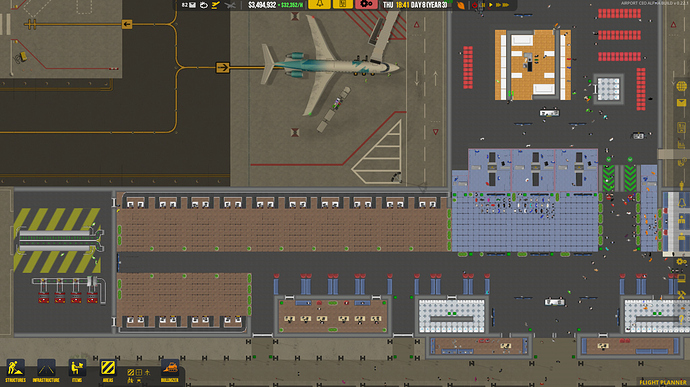 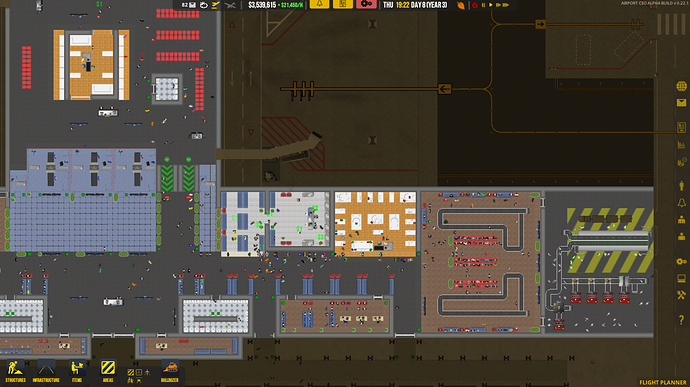 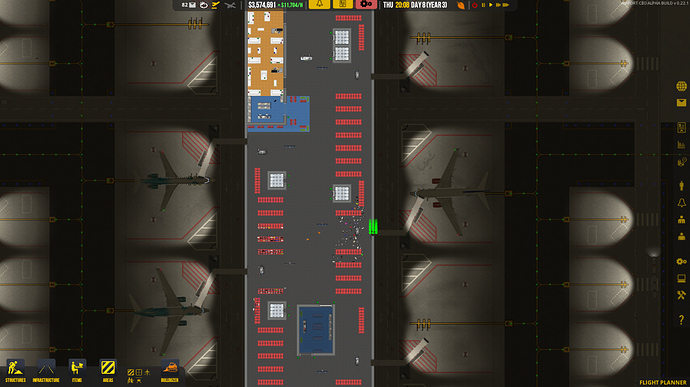 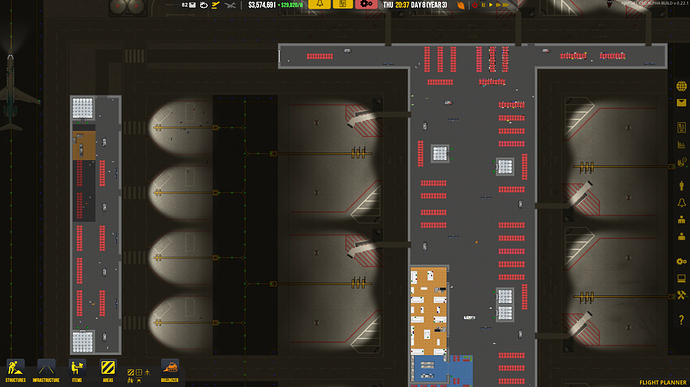 The WHITE/BLUE areas are bathrooms (separate ones for males and females); The Drk BLUE are restaurants withing the concourse, it’s a titled WHITE in the terminal. The light hardwood floors are the shops.

I really like the design, going to give this style a try in a new airport this week.

It works well, though I would have liked to have made the boarding areas for the farthest gates just as wide as the others, but I ran out of room. Originally, there were 5 small gates there, so it wasn’t an issue. I created the little satellite to take on 4 small gates and replaced them with 3 medium gates. The next time, I will start lower on the page.

It does get tough on the FPS, so flight planning is key.

Yea with space issues i now redesign the starting road. I cut most of the length off and relocate the construction drop offs off the main road. The more room for terminal, gates, and stuff that you have the more efficient you can get.

Looks really nice. Gonna use some of your design choices on my airport.