Some of my shuttle buses are arriving at the shuttle stop very early (sometimes 30 mins before boarding opens). While the bus is waiting it is blocking the stand. This means:

Although boarding and deboarding bus takes time, the best solution is optionable bus stops for arrival and departure flights so arrival bus will stop on a different bus stop.

… is optionable bus stops for arrival and departure flights so arrival bus will stop on a different bus stop.

While I like this idea, I’m just wondering if airports are using one airside bus for arrivals and departures the same time or if there’s really separate busses all the time?

So if using only one stand/the same gate for departure and arrivals shouldn’t there be only one bus which is doing both jobs?

Also, only one boarding per stand can be done. Else there would be the risk for passengers taking the wrong bus. But a second bus wouldn’t fit there anyway.
So how about limiting link connection of an departing bus stop to only one bording desk? If small busses get introduced for small flights, then small airside bus stops (similar to car stops) could be added.

IRL it takes 30 min to deboard and 30 to board airplane with apron busses and turnaround time is 4 hours (except LCC) so your idea creates 3 hours waiting ın bus stop.

In my country we have separate bus stops for artival and departure.

I think most airports have separate arrival slots as they want to put passengers closure to immigration and arrivals which might not be near gates. It will be easier with multi floors as you could set your stop on floor 0 so departing passengers come downstairs to leave and you can have a set door for arrivals that leads to the correct part for arrivals.

Separate stops for arrivals and departures do make sense, especially as arrivals stops can be placed close to the “secure exit” zone.

Considering ingame mechanics our turnaround time is closest to LCC turnaround time, so waiting wouldn’t be that long. If waiting time would be to long, the bus could do other jobs after deboarding the arrivals. Another bus could do the boarding of departures afterwards. Still there would be only one bus be working for one aircraft at the same time.

If the job for departures wouldn’t start before the bus for arrivals deboarded/reached the stop this reason for a jam (arrivals waiting for departues to leave) could be avoided while using the same stand.

At this state of the game it doesn’t make sense to use two boarding desks for one bus stop as turnaround time is just to short to handle more - at least in my experience. Of course, with separate arrivals/departures stops maybe one departure stop could handle two desks.

I agree that it would be helpful to have different stops for arrivals and departures. I’d really like passengers to get off the bus close to the secure exit area, rather than next to the departure gate and mixing with passengers in the terminal.

With regard to congestion and bus stops and traffic jams, I always put my bus stops at 90 degrees to the road. That way there is room for 2 busses at the stop without blocking the road. 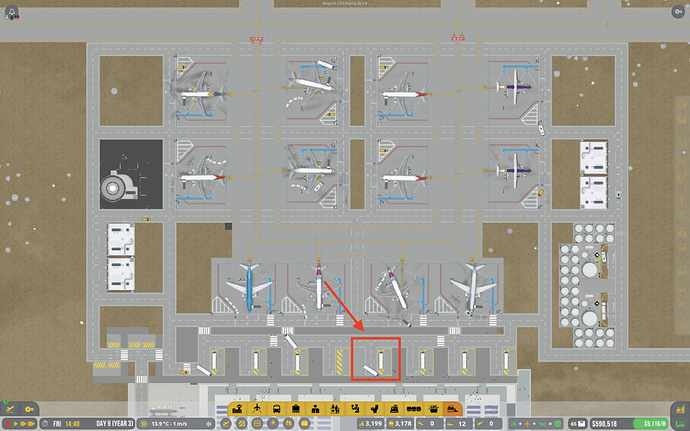