Airport Staff too late for boarding

Hey everyone,
I have the problem that my Airport Staff is much too late at the boarding desk and all flights are delayed.
Because of that I have built a Staffroom near the Stands.
Unfortunately it does not work.

Are there any suggestions?
If not is it possible to implement, that the system picks staff that is near the job task?

Many thanks in advance.
Have a nice day.

Could you post a screenshot please?
Are you sure you have enough security checkpoints to accomodate the passengers and staff?

I would suggest you make sure you have enough staff to man all areas at the same time. I always run a surplus and I do not get this issue. I also run an abundance of large security checkpoints and both staff and passengers can use them all. They will pay for themselves as once you get the flow right you can cope with more flights and passengers.

This is my set up: 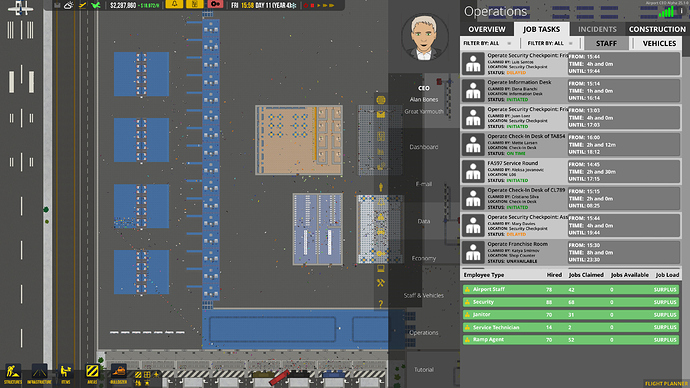 You can see my check in desks, lots of security checkpoints and my staffing levels. You can also see at the top I make a good profit.

Make a staff room in a secure area, this will probably fix your problem.

Hi all, I have a staff room in my secured area but they are still going back to the staff room at my terminal area before check point. I can’t post pictures currently but i have a U lay out.
The base of the U has my check in counters and the both ends of the U are the piers and have a staff room. But for some reason airport staff is always going back to the non-secured area… and all is ok with the room as some ramp agents are using it…
But this is delaying my flights…

I usually look at my needs based on check-in desks and boarding desks (2 per each desk), and do math to figure out, if every desk were manned at one time, how many staff would I need? That is the number I hire; that way I know there will never be a shortage. Location of staff rooms help too. If I am running a bigger airport, I “mitigate” this by extending the time between each flight, because until the new pathfinding/rendering is released, I believe this will continue to be the norm.

When will the new pathfinding rendering done ?
And don’t think, things are 100% fixed then. The distance remains the same from staff room to the gates…
Problem is they depart too late, and from the most far away staff room…

I think it is something that will definitely be addressed in the future. I have two staff rooms with exclusive access to airport staff, one behind the check-in desks and one in the terminal close to the gates, I have also a huge overplus of staff, but still, almost all the gates start the boarding process with 1 hour delay.

For now there’s very little that we can do, let’s wait until the new pathfinding and then I’m sure that the developers will address this, especially when multi floors will be implemented, the distances to cover will increase a lot.

This message is from a year ago, but I do now have the same issue. Airport staff sometimes late and sometimes even won’t show up. In the attached image, airport staff was sitting 2 gates away and I had 26 staff and 8 jobs claimed. But the boarding for this plane never started and the plane left empty. 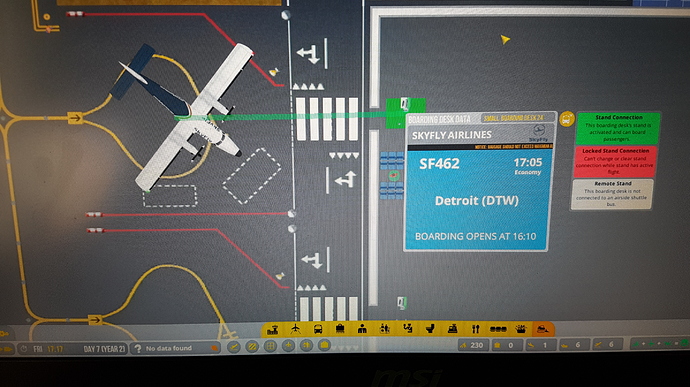 I’m having the same issues. In fact, it’s killing my game every time my airport gets to a certain size. I have staff rooms all over in both secure and non-secure zones. At one point I built specific staff rooms for ramp agents and airport staff right next to the gates. No dice - the staff would never show up on time, my flights got delayed, and the Flight Planner got inextricably screwed and, no matter how often I saved and restarted, flights would show up on the planner as enroute as much as a full day behind the Planner schedule. I tried cancelling the flights back in the past so that the upcoming flights would be the only ones occupying gate slots, but all that did was stop all traffic coming into the airport at all.

It’s a real shame, because this game is really, really amazing… up to a point. Past that point, it becomes a nightmarish waste of time. Hoping further development happens to solve this.

The request to developers is outstanding, to connect staff rooms to stands. So, staff can be near.

Everyone please bug report when your staff do not show up for boarding it. I have been doing it for weeks now, and nothing gets corrected. They apparently need multiple instance to be reported for it to be moved up on the priority list. We get results in numbers apparently.

Can we see your airport? This is not a problem that has effected my airports and wonder if it a size or design issue which are causing your issues.

Number of bugs give the devs more data to find bugs. Low reporting are more likely to be poor design or problems with individual files and not be systemic bugs.

I’ve been reporting using the in-game bug tracker every time it happens.

For me, I do not find it to be limited to airport size/design, but am also saying this can contribute. This is an original-sized map, meaning I did not alter GameData.json for more building space. I am just really let down because this is happening in my airport not necessarily because of size but rather airport staff stupidity. Majority of my delays are because the assigned airport staff for boarding processes are being dispatched from the farthest room, outside of security, and then they leave, to go right back to it, PASSING A STAFF ROOM (WHERE THEY ARE ELIGIBLE TO CHILL) RIGHT NEXT TO THE GATE THEY WERE WORKING.

Yeah, the sprites are tremendously stupid. I actually closed my staff rooms outside of the secure zones and restricted the staff - particularly the ramp agents - to a room close to the gates. So I get a message that my staff can’t get to their work area, and when I zoom in on the guy, it’s a ramp agent standing outside of my security area like an idiot, not moving.