Alpha 36 and the emergency update has now been deployed on the default branch, in version Alpha 36.3-2, hurrah! The full change log can be seen in the first post of this topic, or immediately via the Steam message: 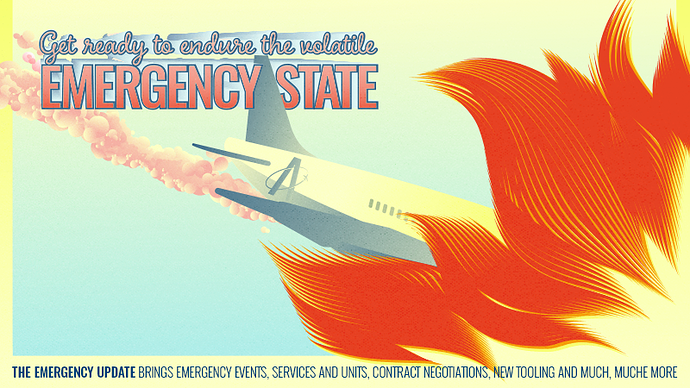 Oh no! With great airports comes great responsibility. The emergency update introduces up to 24 different types of emergency incidents which any professional airport CEO is expected to handle with ease… or at least try. With emergency response...

… has as promised been reset! All you achievements have been lost and you will have to regain them once you boot the game.

Airport CEO is now officially in BETA! The next dev blog, on Wednesday, will detail exactly what the development pace will look ahead and it will be accompanied by the first beta version of Airport CEO on the experimental branch, Beta 1.0-0!

Until Wednesday however we will continue to maintain the Alpha version of Airport CEO as any critical bugs are detected and reported!

Huge congratulations!!!
Been with you since the start and your work has been very impressive.

How do i contract air ambulance id on’t see these?

Wow, an update before midnight, congrats and enjoy a beer or whatever to celebrate.

You don’t contract them. They will appear random as other events do.

As I said, emergency spawning will continue to be balanced through beta! You can test emergencies with the following F9 commands:

Some emergencies, because they spawn through physical simulation, cannot be tested via the console. Remember, achievements are invalidated when using the F9 console!

you need to color the vehicles with the paint tool on bottom right toolbar. not via the vehicle menu. I had the same thing and then when I painted the vehicle via the color tool in the lower right of toolbar I got the achievement… FYI @ devs

Question, is the unique game ID blocked for achievement, or just that save / session?

Only the save, you taint the save when you use dev stuff!

I understand that there will be no Russian and Chinese planes?

I hate to be negative but honestly the new vehicle overview tab is kinda bad for organization. Before you could filter by exact vehicle types, now only 5 categories. For example cabin cleaning, catering, deiceing, push back, and large push back trucks are all in one category.

It would be great if it showed a exact number of specific vehicles type because it’s easy to lose count and hard to tell what you need more of.

(Also with the new tab, the select and unselected grey-out of the icons is too similar)

Great job, but where are the new planes?

At the moment non of those have been announced, but we can expect that new planes will come during beta and also after beta.

I am sure that we will see an SSJ, Irkut, Comac or old an Tupolev somewhen.

Thanks for the new update and congratulations on (almost) reaching Beta phase!

I was wondering, has there been any wordt on the modding and or skinning of the emergency vehicles?

It sounds somehow not optimistic. A month ago I started correcting the Russian translation. He was very clumsy, and not complete. For a whole month I read and corrected it, several hours a day, but when I opened the experimental Alpha, I realized that simply translating, according to a single, created terminology, is half the battle. Everything in the game is crooked, goes beyond the interface windows, words are poorly chosen, not synchronous, does not fit the place in the game. In general, bad. When I need to finish correcting the translated and the translation itself, it will be necessary to research everything in the game, doing the passage. And there were no Russian planes, and no. I start to feel sad, my motivation falls. And the TU-154 with D-30 engines would buzz in the ear, it would be another matter! Bringing the translation to the correct one will require a lot of time and effort, as it turned out, and if no one had done it a year before me, now that everything has been translated, no one but me will complete it, and soon the beta version will not have much time.

So guys, @Alexander, @Olof, @Fredrik the guarantee of a high-quality Russian translation is the presence of at least one Russian aircraft in the game at the stage of testing and correcting the translation.

Power surge, self check in desks do not reopen after. Having to delete and purchase them again.
Baggage drop as mentioned by others, flight is open only on one when there is multiple available.
Security, passengers queue up on the same check point instead of using an empty one.
Weather emergency’s do not continue to the next day on the schedule.
Mayday emergencies occur during weather emergency’s when the airport isn’t accepting arrivals.
Sandbox selection in the debag menu doesn’t work.