Woho! Alpha 24.0 has made it to the default branch.

@Olof Interesting to read about the new contract system. Sounds like you’ve looked at it from all angles.

There are still some Runway overshoots.

I’m probably just being an idiot, but where does it detail the new contact system?

Will post a thread about the new devlog now, was about to do it but then the alarm at the office went off and we had to evacuate, lol.

Stripe Air and Air Strada have question mark as branding both in contracts menu as well as in flight planner…intended feature?

Actually intended, new contract system is getting prepared to be put in place which means some legacy is expected. Those question marks should flush them selves out after awhile.

I hope everything was okay?

Oh yes, sorry, I unintentionally exaggerated it a bit, it was the signal before the alarm was enabled so that we wouldn’t trigger it…

Ah, good! I almost thought the PC’s got fried trying to run some of the larger airports!

With legacy you mean I did those contracts before update so after fulfillment they will sport a new logo for those airlines? This I understand.

You are still going to put the aircraft Beechcraft Baron G58 on the next update?

I really like the new contract system. Its exactly what I wanted to have. You really followed the discussion on the forum and took out the best ideas. You did a great job in the last weeks! When can I expect the new system to be implemented? And enjoy your holidays!

Just wondering how many medium gates everyone has in there airports

Contracts seem to have something wrong with them 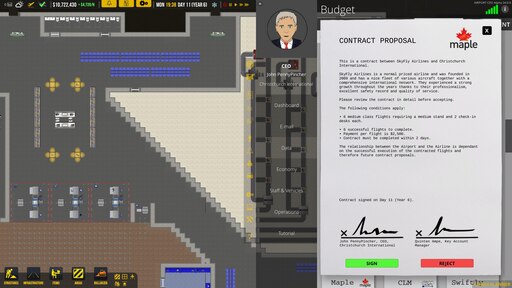 Steam Community :: Screenshot :: after signing contract it doesn't appear in...

Steam Community: Airport CEO. after signing contract it doesn't appear in flight planner, and all contracts for that airline are signed when clicking on them.

I signed 3 contracts, the last one (in picture) signed fine, but then did not appear in the flight planner…
When I went back to the contracts page ALL contracts of that airline were signed…
I then did a exit and reload, when I got back in the game ALL contracts of airlines could NOT be clicked on at all…

after some time of playing (30-60 minutes), info window’s details (stands, baggage bays, shops etc) are gone. they are empty of buttons etc.

Did you try to scroll up with your mouse?