Hello all, and forgive me as it has been a while since I have posted on here. Is there any foreseeable update on aircraft pathfinding as it pertains to crossing paths? I still have many ground delays because of crisscrossing paths with aircraft waiting on others on various sides of the airfield. Still feel like this is a major holdup with the playability of the game and airport designs. Is there going to be a possibility where an aircraft can go “oh, it looks like I CAN go even though someone put in a path prior to me…” This ends up why I keep leaving the game for extended periods. I design what I find to be beautiful, larger airports (without modifying the default airport land size). It all fits with what the devs say is a good map size, and still I get ground delays because the aircraft can’t perform no-brainer taxi decisions. Maybe a game component like the “Delay Departure” for delayed aircraft, where it prompts/asks you for ATC permission to proceed, overriding an existing aircraft path reservation.

Sadly still the biggest issue of the game in my opinion.

I could live with if planes would taxi through eachother just to get a smoother run and prevening delays.

(You were 8 months away? Thought you’ve just wrote yesterday lol)

/edit
I think this whole waiting routine is because of the runway departure order which is sadly to say a design mistake.
The planes depart in the order of the finished pushbacks. Means a plane has to wait until the earlier pushed back plane arrives at the runway.

It should be the same queue logic as passenger have at check-in/security etc. First come, first serve.
All others then line up in order when they arrive at the runway.

I manage to beat the pathfinding issues by making multiple taxiways 2 per runway, but this also can kill your economy severely. I would recommend just playing sandbox while they’re fixing all the issues. 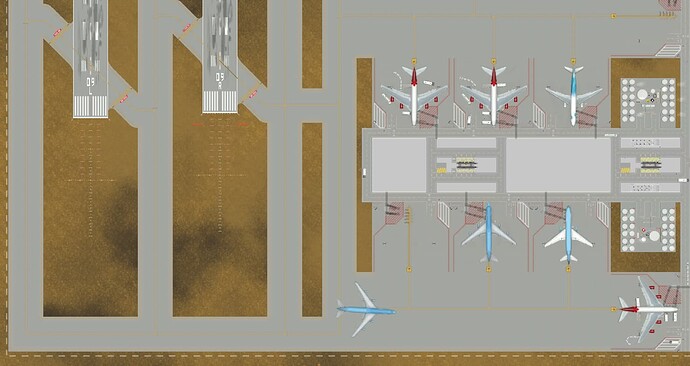 this also can kill your economy severely

One can hope this can become a little more realistic or common-sense. Thanks!

In case some people don’t know, hold short markers may be a good option to make pathfinding better without having to implement massive changes! See HERE!

Honestly, I will take anything. I really would love to know what is the “hold up” on this issue? Is it actually viewed as something that needs to be addressed? Or are we expected to just run the game on linear terminals and not allowed to be creative in “fun” designs?

QUESTION: What is the movement on solving this, if any? If not, I humbly as why, if this has been brought up multiple times, since Alpha, and is still being discussed today.

I will try to give some insight. Designing a well-functioning ATC system in a dynamic world is a lot more complex than it sounds like. There is a reason why people still handle ground traffic at major airports manually. You are correct in that the problem with long waits can occur when another aircraft needs to traverse a certain path before any other traffic can use that segment. This problem can be solved if there were only two aircrafts pathfinding as it would be easy to calculate any intersection and path overlapping ahead of time, and adjust the paths. However, as the airport gets into 10 or more aircraft that needs to move around, it is very difficult to predict exactly where each aircraft will be ahead of time. Some might need to wait for other traffic hence arrive at a specific point at a later stage.

This would not be that much of a problem if taxiways had two lanes but the fact that they are single-laned both ways can easily cause deadlocks. We have spent a lot of time trying to get this to work flawless but there are still cases where some aircraft will need to wait for others to pass. This is of course dependent on your layout and how you use the arrival/departure, small/medium/large and one-way constrains on the taxiways. You can also use the taxiway overlay to find busy taxiway paths and try to route traffic more evenly. Unfortunately, it is not a simple fix so to have any chance on improve it I need to get a bug report with so that I can analyze the layout and state of your airport when the issue occur.

Thank you for your long detailed answer and especially the information on how patch finding in the game works.
I’ve tried many times to send in a bug report but every time i got an error message “save game to big”. Right now it was working

(MERCURY-45263), unfortunately there are a.t.m. no scheduled flights.
I try later again to send an bug report with a full flight schedule.

The new bug report with a full flight schedule is MERCURY-45276.

So why the hold short -markers wouldn’t work? That would allow to split the reserved path into shorter segments and thus more “block” to get plans through. Now the plane reserves whole path from stand to runway blocking everything else going across that path at any given point, regardless of how long the plane needs to wait.

I’d imagine with shorter reserved segments at a time, that problem would be greatly mitigated. Any resulting deadlocks would then be down to player, and solvable by using one way signs etc.

Or, just forget the blocked paths altogether and allow planes to cross them. It’s not like they don’t go over each others, bump against each others on push backs etc. already so realism in that sense is long gone.