Currently runway entrance/exiits don’t work at the ends of a runway, only on the sides. Adding them on the ends would be a great help to my airport design.

As well as adding a blast range section behind the runway start.

I know this is ‘just a game’ but runway entrance/exits at the ends of a runway looks weird to me. It is almost the same like having runway lights going through roads etc.

If I get you right, your airport design is “wrong” (according to real world) 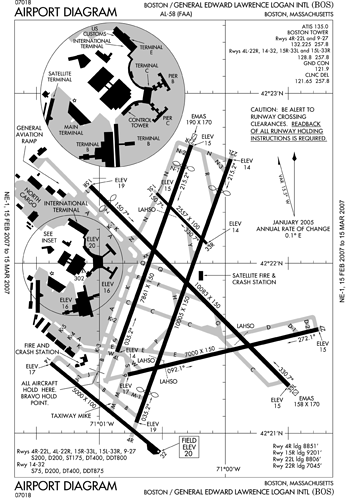 I can speak from a pilots point of view, those are not holding points but rather look like stopway/clearway or EMAS. You can also see on the airport diagram that they don’t have a taxiway designator (letter), so are not intended to be used as a taxiway. In general holdingpoints at the end of runways would be a very impractical thing in reality. You can’t have aircraft take off and land on the same runway in such a scenario for multiple reasons (ILS signal, approach lighting system, clearance when flying above etc.). Also if it is used for take off only, the separation required due to the blast would be a lot higher than having perpendicular or angled entrance/exit.

I’ll second fredehorn here. It is generally not a good design to have a taxiway join the the approach end of the runway for various reasons. Though the FAA does have a diagram of a taxiway joining the end of a runway in the manner described, I can only think of a few uses for it. The real world examples I have seen, it is usually a case where a runway was added to a taxiway and used on occasion as a runway for smaller aircraft when not in use as a taxiway. The main drawback is the increased chances of a runway incursion.