Hey, guys. Seems that the counters for numeric achievements don’t work. I have 725 flown GA’s for a week or so now… Perhaps something you may want to look into.

And no, no bug reported.

But with a bug report, the devs can take a look at your savegame.

Mine are working OK - are you on Default or Experimental branch? 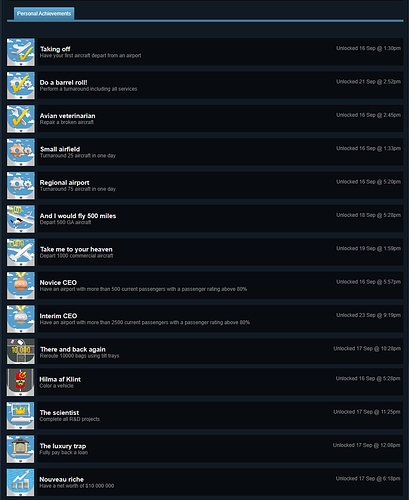 Note that if you have unlocked it before, there is no reason to dissappear from the list.

I’ll add my experience to this. I, too, have trouble with achievements counting up and unlocking. I also experienced my achievements resetting, though I will chalk that up to having earned them on experimental builds.

But the last few days once I returned back to ACEO, achievements wouldn’t progress. I swapped back to default and started a new airport. I got achievements for maybe 10 minutes of the program running and then they would no longer progress. I was able to restart my game and I would get progress before progress would halt. Now I’m unable to gain any progress towards achievements.

I did notice that using the steam in-game menu would not update progress like the desktop application would, but now neither are updating my progress.

EDIT: I will also add that the achievements were hit-or-miss on the last default alpha build for me. After updating to Beta, they no longer progress with my default Alpha Airport.

EDIT 2: Created a new airport in the Default Beta. No achievement progress at all.

Just on a side note, to give justice to @devs, achievements reset was announced in one of the dev blogs.

Correct. From the transition to Beta, achievements from Alpha 36 were set back as those were only for tests.

Also achievements do not work when

There was an issue on beta 1.1-1 which caused all achievements to be invalidated when starting a new airport. This has been fixed as of beta 1.1-2!