I just downloaded the game via Steam. I’m lacking a manual or a tutorial level (you know, when the voice helps you with everything). So I had to restart, and restart and restart in order to get a somewhat functioning airport. After hours of trial and error I managed to land an aircraft. So far so good, a Bombardier visits my airport. But I don’t know how the AC should leave the runway. It just stays in the end of it. Despite a taxiway with nods. I have to admit, I have only one taxiway for landing and departure. I switched the nod to runway but nothing happens. Someone who can help me?

Hi Bart
Did you place “Holding point” at the connection of runway and taxiway? Also we can help you more if you show up airport’s screenshot.

I’m lacking a manual or a tutorial level (you know, when the voice helps you with everything).

Did you check out the tutorial panel via the management panel? Press tab to open it up, then press the lowest button “Tutorial”. There you have three tutorial chapters to work with.

Thanks for the quick reply. I’m gonna check it out, I only found some sort of dictionary. I’ll drop a screenshot if I cannot solve the problem. 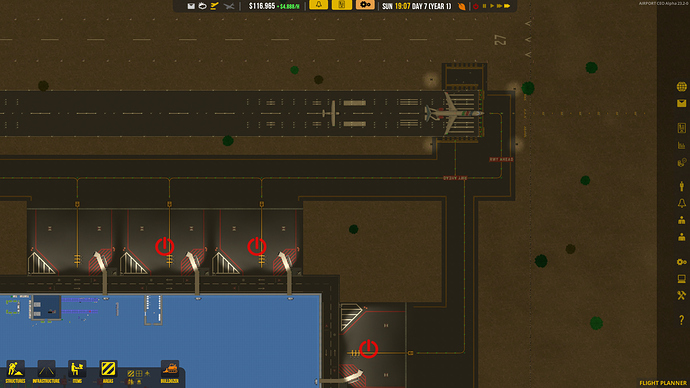 I think it is your taxiway nods.

If you click on the aircraft, bottom left it should have an error message, that the aircraft is awaiting for a taxiway?

Yes you are correct. The nodes are not connected to the center of the runway.

Indeed, and I found the Tutorial, I didn’t click everything. Tommorow I’m gonna try to finnish it. That would definitly make things more easy. Thanks for your help.

Hang on hang on @Bart

Euhr I don’t know, I donwloaded it on the 227th of Novembre.