Why do these PAX and Staff loiter?

I’ve noticed that some PAX and staff like to wait at the exit gates… They stand there for 20 seconds or so or even longer. 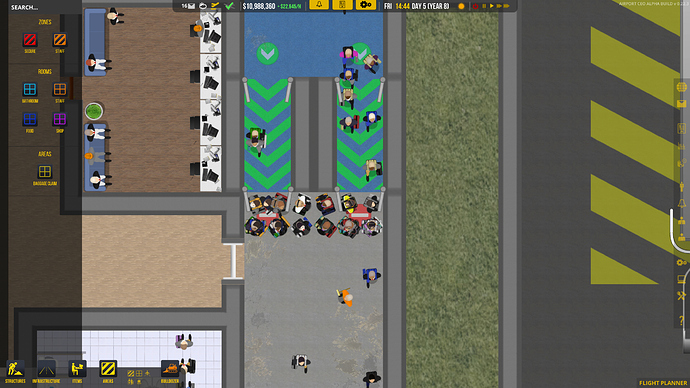 Same here.
Mine are standing the whole day waiting (I think looking for path or for their AI update loop)
Same in bathrooms and boarding desks.

Unfortunately staff is doing the same.
Everything comes back to normal late evening when there is less than 700 PAX in the Airport.

It’s one of the worst bugs right now.

If they don’t have seats or (for staff, a job) then they’ll just wait. This is fixed with a staff room or enough seats for the passengers to sit on.

There’s enough seats for both PAX and staff, especially PAX.

The room to the left of the exit is a several staff rooms.

Is it a long walk to the seats/ reclaim

I’ve got exactly the same problem, staff and passengers.

I think the developers have made a fix for this now.

Is it a long walk to the seats/ reclaim

Ellipsis, How big is your terminal? How many passengers do you have in peak time?

It is strange you don’t have any issues. All my saves have same problem: staff, passengers, construction workers, franchise employees.

In peak I have 3000-3300 passengers. Most of them standing in toilets, exits and staring at the ‘coffee fridge’.
They are even missing their baggage passing next to them. AI update is too low on big terminals and 3-5 FPS. 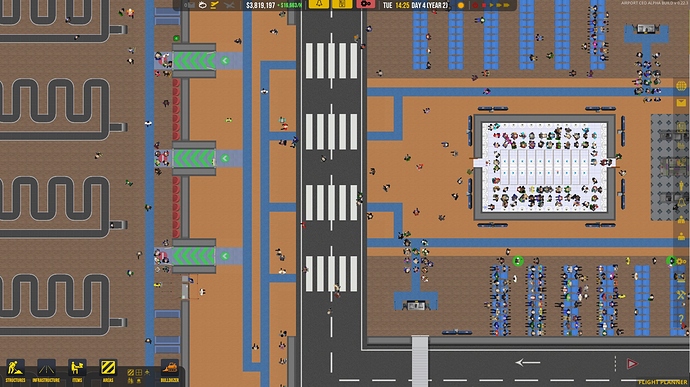 It’s almost certainly an optimisation issue with having terminals of that size with that many individual agents. I suspect it’s just that it’s taking a long time to calculate their next action, I’ve been starting to get the same thing but when I minimize the amount of gates I use it’s less of an issue. I think we might just have to wait a bit for optimisation etc.

That said I know the ramp agents have a fix coming in the next experimental push:

We have implemented a fix for this since a lot of users are experiencing issues with it, ramp agents will no longer use path finding for doing their tasks but direct paths. Should remove this issue and will be available in next experimental push.

What I have just realised: I had over 400 staff and 150 construction workers.
I’ve sent construction team for 2 days holiday time, fired half of “resting” Ramp Agents and Airport Staff.

…and as I thought!

The staff AI loop (calculating next action) got much better! Ramp Agents started to make a Service Check Round on time, and now they are actually even loading and unloading baggage !

- (oh no! that’s like in reality! too many staff and nobody’s doing nothing

- what a perfect simulation game)

I think I will reduce some flights waiting for the next patch to stop “loitering” (lol) and bathroom clogging.