Hey, I am having issues where ramp agents can’t leave remote stands any ideas why this is? 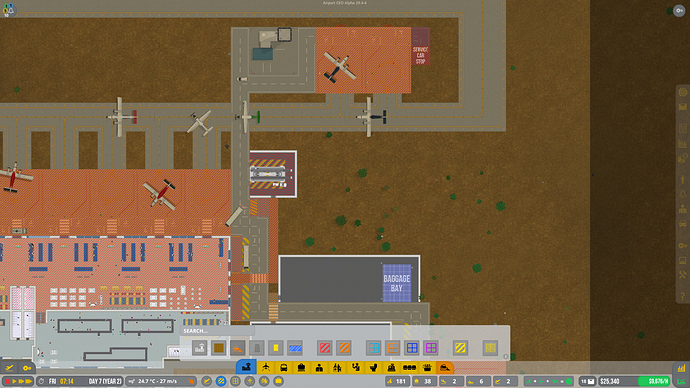 I experienced this already too. They don’t get picked up, even thougt a service car gets there. Already reported that some time ago. You may report too, so they get more data to fix it.

Meanwhile you can zone your service zones as secure. Then ramp agents will start to walk back.

Why is there a Service Car stop near your remote stands?

Where are they supposed to be placed. I havent’ looked into this fully yet, but would ponder how a single break room with many service cars would out perform the walking distances the seem to randomly choose.

The service car stop should be connevtedbto your terminal. It’s wherebthe ramp agents get in first, the carvdrops thzm off on the stand itself then.

Guess the second one which isn’t even built yet, should be an attempt to get the ramp agents back after they didn’t got brought back. There is already a finished sevice car stop connected to the terminal.

There is a bug where ramp agents don’t get picked up from a stand. So the way back is the problem, while they get brought to the stand without a problem (at least in my case)

I’ve had a case today where they could’t even leave a terminal stand, it didnt accept having secure zone only to the crosswalk

I have also noticed this, where ramp agents get stuck on remote stands.

What appears to solve it, is makes sure that there is a secure route back to the terminal/service car stop, then they appear to stop complaining and getting stuck. It doesn’t have to be the actual route the car uses, but just a route.

that was being deleted, was trying to see if that would fix it

so the service car bay needs to be accessible from the terminal.

Yes, that is correct, and it has to be secure zoned.

yeah but they werent picking them up from the stand so were stuck there.

this did appear to solve it

yeah but they werent picking them up from the stand so were stuck there.

I found that making a secure footpath makes them walk back and since they only use it with bugs, they can be very long and unlogically until they hit the gate area again.

your assumption in the first part of your comment is correct. i was already demolishing it.

so i created a secure zone all the way back to the terminal, they just walked back afterwards.

thats what i did in the end. it worked

It didn’t solve it, right? They walked back instead of getting picked up by service cars? If so, it’s only a work around but no solution. Just sayin’