Smartness of Staff and its Effect

So, I was just thinking about how incompetent staff can cause crashes, and decided to make a thread to discuss. The title is really the question. Will a tarmac de-icing crew who hates their job and is being careless cause an accident? Or will a good TSA officer increase happiness at security? Honestly, I do not know as i haven’t heard much on this matter.

This would be a good idea, would sorta make it hard to find a good staff member. Maybe we could search almost like Software Inc does it (pay to search, but the more you pay, the better you find)? But also the way displayed in the gameplay videos (potential staff apply).

And each station has other stats that are important. Security = attention to detail. ticket desk = friendliness. Efficiency for both to work faster. Training increases a stat. I.e. customer service training for friendliness. Each employee also has a max to their stat so you cant just train anyone for any job.

plop aaand i woke up…

We can see in the second gameplay video that the devs have already implemented progress bars with personal skills when you hire a new staff member, so I suppose that they will develop this further down the line and give it influence to how your airport runs. 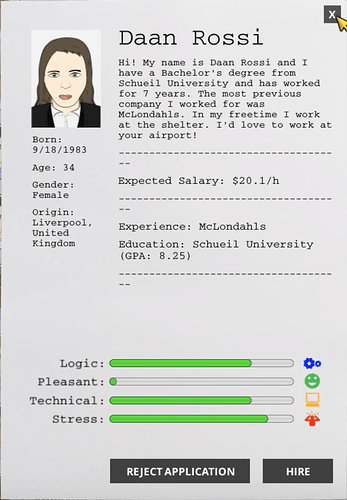 The title is really the question. Will a tarmac de-icing crew who hates their job and is being careless cause an accident? Or will a good TSA officer increase happiness at security?

That’s the end goal! We aim to build a system where the skill of an employee impacts their work and then balance that impact to the importance of the employee’s position.

For example, hiring a shitty janitor will impact how clean they can get the toilet but in the end that doesn’t really have a huge impact on your airport. Of course, if you only hire shitty janitors then you’ll end up with a shitty airport… but having to consider the skill versus the pay grade for each employee when your are employing a work force of like… I dunno, 500 people, can become tiring thus we will balance it so that randomly hiring people will won’t devastate your operations - instead, putting time and effort into hiring the correct people will give you that extra edge thus we’re working with a carrot instead of a whip.

However, if you’re hiring a COO, you better take note of their skills as the importance of their role will greatly impact your operations.

This is the end-game plan but most likely won’t make it to the pre-alpha release, although we do simulate skills and fatigue right now it currently has no impact on their work. Might be implemented before the release, but since these are quite “soft” values it requires a lot of testing.

Thanks for clearing things up, however, I STRONGLY disagree with each employee having a max stat. They should be able to always keep training. Speaking of training, how will you train employees?

Great idea. It is something we will keep in mind. Training of staff could be a way to invest in your employees. Renting out conference rooms could add some extra cash. All great ideas!

Daan. Ha.
I know a Dan. Also Dan could be short for Daniel.
GPA 8.25 Where did they go to school. Aside from looking at the comedy of it.

The previous company could be coming out of school with just a High school education or just a GED. A lot of jobs don’t require any college.
The only few that are actually required are pilot Control tower operator and maybe 1 or 2 others.
Other than that they can train anyone to be a good TSA agent. All you need is a security clearance.

I don’t like the idea of paying to search applicants.
They should just randomly apply. You can save your applicants applications on file for 6 months-1 year.
When the need arises you give them a call and see if they’re still interested to come in for an interview and gather more information.

Could limit the information given on the application to just name bio age.
As the interview goes by. You find out more.
4 bars at bottom, expected salary experience gpa, ect;

There was 1 game I have seen work liked this.

Could add in the ability to ask different question of your choosing.
To gather how much logic technical ect; they have.
This would be up to devs as the coding for that may add to much to get done.

That would be cool and would be more like real life, and it wouldn’t even need to be in an interview format.

For example, when they first apply, you could see just their name, age, GPA, college, and previous experience. All things that would be on a resume. Actually, maybe you could have the option to remove age and name, as many companies do that to avoid bias in the hiring. This could all be for free, but there could be an option to buy an upgrade that filters out certain characteristics such as low GPAs and no previous experience in the industry. These are things companies can do in real life with software.

Then, you could do things like interview them, check references, and have them take tests. The first one you do would give you skill bars with ranges, and each extra thing you do would narrow down the ranges. That way, you would have to decide how deep you want to dive to tell their true skills. For something like a janitor, you may decide to just hire them on the spot, but for a COO, you would want to do everything. Each thing you do could either cost money or a more complex HR system could be added and then each thing would take your HR employees’ time, as well as possibly a bit of money.

Ideally there would also be an option to have your HR director make their own decisions within your guidelines. For example, you could tell them not to hire anyone with ratings below certain amounts, pay above a certain amount, and give them guidance on how to run their selection process before hiring.

I like the idea, though it does seem a little complex to be implemented.