It’s an option you choose via the main panel, you sure it’s not showing?

it is showing, but in the game, I don’t have unlimited money. 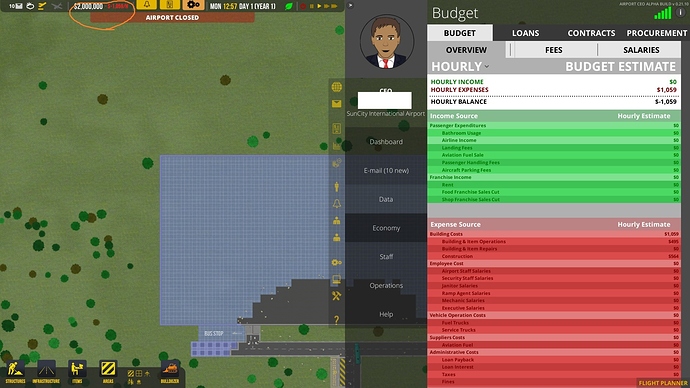 This was in my sandbox, I go broke to it dose not subtract - or added automatic or it keeps showing red so I am still losing money. The UI dose not show me losing money stuck on $2000000 it’s a tough unsolved bug. Scratches my head… If I make a Fresh Save, I can email you’ll developers if it is not look into it already. I might not start a new saved to Patch 0.21.11 Comes out tomorrow.

Its supposed to work this way. With sandbox, when your in the red, it doesnt matter. I dont see why this is a problem?

Yeah as @BattleSkorpion said, in sanbox mode you still see the cost at the top but it doesn’t actually deduct from your fund.

@Harvey For me… Money does get deducted… and I do go into red (balance//fund)… but negative money doesn’t prevent me from creating or buying anything. Its actually good that I can see how much I spent to make my Airport.

How would you like it? Before in sandbox, money was getting deducted and you could go minus without any effect. Then we got some complains that people didn’t understand that they were in sandbox, so I blocked it from updating the total funds. Now people are confused again.

Should we block all financials aspects?

Maybe change the funds to the text “Unlimited”, prevents confusion.

I’d suggest just hiding funds altogether if you can. Out of sight, out of mind. Nobody will worry if they can’t see it.

Either hide it or display - Sandbox -

BUT have a panel in the dashboard that shows the finacances so incomes and outgoins and how much spent cause it is always interesting to know if it actually works?

Exactly, i would like to know if i have a viable airport, even though i might’ve used a ton of money to get it there

Well that’s interesting my funds do not change at all but only the income/cost changes.

Sandbox mode works fine for me. Bank balance doesn’t change but hourly cost does, but that doesn’t matter during sandbox mode. Try re-installing the game?

YEAH same with me it dosnt work im on a mac is that the issue?