Thinking out loud.
How about splitting the whole concept.

Do we really need to have 1 object for inbound and outbound baggage?
Or would it maybe be better to split this

Side note: now all bags stack up, would be cool to have storage bays where the bags first arrive after check in before going to the plane

Love both ideas. Makes sense to have 2 objects, and also to have bag storage for flights not yet ready to load.

Be advides that don’t pass underground belt under baggage bay. Belts mix with each other.

No you can use underground belts under the bay, just not other belts.

I personally tried it and bags on baggage bay transfers to underground belt in middle of bay.

I don’t know maybe they fixed it.

Works in my previous airport, i didn’t used to think it worked but other users posted images and i gave it a try. Maybe a new bug causes it to break since I tried or it was fixed after you tried.

Yes, very much so, I spent hours building a baggage system to get around this very problem. Being able to flip them rather than just rotate them would be super useful.

My TIP for solving that issue, I fed the rejected bags onto the other belt system that fed into another bag checker. Obviously it would spit it out again with the other bags to check so I only had to build one lot of specialised checkers. Then used to the flip trays to spit them back on to the correct belts.

I had four loading, unloading bays in the same baggage area.

I use the same idea: Planning interior and baggage belts

Here’s a screenshot of in action… 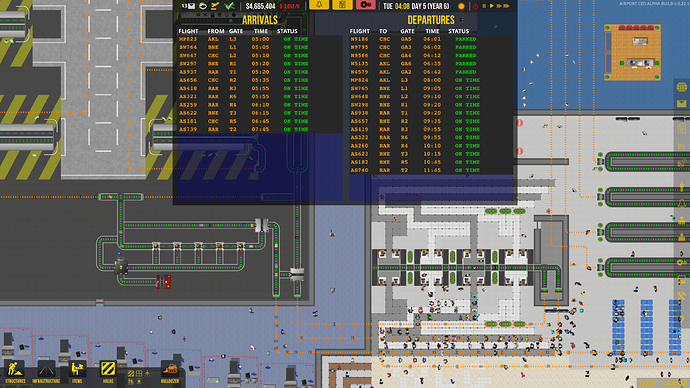 Building this I had Ghostbusters in my head… “Don’t cross the streams!!!”

A small feature request too, a shortcut key for the flight schedule please…

Also, make sure you keep capacity in the lines so they don’t back up the checking desks.

Not the flight planner, the schedule as shown in my screen shot. It’s super useful now.

Oh, yes that would be nice to have a shortcut.

Would offer you a lot more flexibility in building your baggage system.

Agreed they would be.

I agree. At Gatwick the trucks drop off the bags just the other side of the wall to baggage reclaim.

All check-in desks send bags to go through baggage sort and then distribute to a few outgoing bays.

Separating these operations would make for more interesting design.

Thanks, just wanted to ask how it’s done IRL…

Please, dear devs, think about that!

In real life they are two separate areas.

huge support to this issue

By doing this later you’ll be able to add in transfer baggage stations for dealing with transferring passengers. In addition to this could pave the way for cargo. A loading dock could act as a inbound baggage bay, while a outbound cargo bay could act as a loading point for air-side cargo vehicles.