Quick question about the flight planner

i see that there is not restricted flying hours, is this the same no matter where your airport is in the wold or will it vary depending on the location ? or is the some wway we can make airport 24hr ?

Don’t know for definite but should like the kind of thing you can “unlock” by upgrading runway lights and such. I would be interred if any of the community know if there are any airports that are allowed to operate flights 24hrs a day

Most likely, in the early access release, there will be no restrictions on flight timings (or it would have be discussed by the devs).
The flight planner with the restrictions is shown only in the trailer, more of an idea of what the game would be like when done. Still some way to go…

What makes you say that the planner on the video is not going to be in game from the start?

This was in the dev blog of last night: 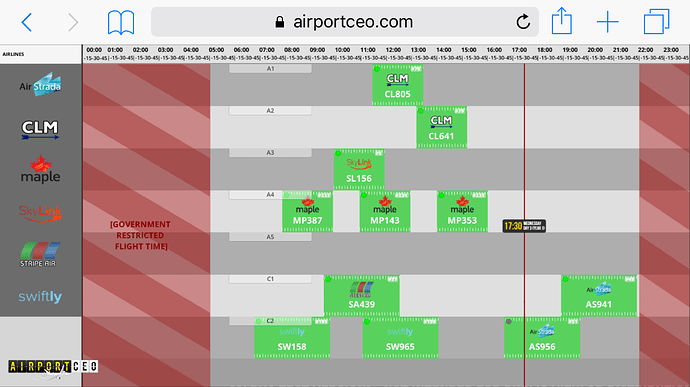 Yes. I saw the image too. It was used more to show the gate assignments than time restrictions. I mean i would love to see time restrictions and such.
Just that it is quite a major feature and I feel that it would atleast deserve a special mention in one of the change logs, if not an entire devlog dedicated to it. I just feel that I would remember if I had read it.
That being said, I would love to be wrong in this instance

I think they made it very simple for now. When the time comes i’m sure they will expand on the idea and make it more complex

Yes I agree! I think that the image clearly shows that there are blocked times through the night. I am sure there will be lots of little features that we won’t get to see until day 1

There are plenty that run 24 hour operations. My home airport of Melbourne (about 35mil passengers annually) operates without curfew and many red eye international flights leave around 1am. Granted most of the flights between 1-6am are cargo flights.

This is in stark contrast to Sydney which operates under strict curfew. So both should definitely be options.

And inbetween. Reduced flights either in number or plane type

I’d like to see this as part of a broader political simulation. Balancing the interests of the airport to work 24 hours a day whilst dealing with NIMBYs and other political pressure could be a really good aspect to add to the game. I think it deserves more than a quick workaround though.

I can see a role of environmental officer as an employee and as part of the upgrade tree. They could help build a case for extended flying hours, expansion and placating the NIMBYs. Most big airports seem to be expected to be good neighbours and consider the environmental impact, so they could also help identify flight paths that avoid populated areas. Maybe they could negotiate that you provide so much money to environmental schemes in exchange for longer flying time, with the money going to carbon offset schemes and the like (which would largely be off screen but would boost your green credentials, public image and extract money from your bank account.

All rough ideas off the top of my head.

Thanks mate I was not sure if there were still places it was allowed, I have not made it south of the equator but it makes sense given the distance to other destinations that there would be flights all times of the day.

I’m additon to environmental concerns it would be good to have to improve your tech to make sure flights can carry on all night. Would be a good trade off with increased revenue of 24hr operation verses the cost of extra staff shifts and no down time for maintenance.

I agree about the 24 hour ops. I think it’ll become particularly important once cargo flights are introduced.