My Airline Satisfaction in my auto-planner is this;

Where does the above difference come from?

It is quite confusing. What I know is that individual airline satisfaction is improved by handling flights on time, while delays lower it. Higher satisfaction means they will give you more flights.

On the other hand, overall airline satisfaction is affected by the above ratings (fuel price, services, stand quality etc.) I think it only affects the overall airport rating, which makes higher rated airlines interested. The description also says something about offering hub status when the rating is high, but I don’t think that’s in the game yet.

It seems like these two ratings are completely separate values that don’t affect each other. Definitely something that should/will be improved during Beta.

For a very long time, I asked for defining number below such calculations.

Just like I reported in incident emails; as CEO you constantly do not have the management data to improve your airport. You only have results on arbitrary systems, that are not detailed anywhere.

Every-time I play the game, this kind of stuff turns me away.

Plus the fact that you cannot refactor loans. The game design sees loans as something bad. The average airport in the world has a huge leveraged position. Without restructuring you cannot develop into high tier airport building, only by being patient for a very long time, while accumulating money. That does not feel very good, since your money will be drained for reasons like above. That you cannot steer, since you have no idea what caused them in the first place.

My biggest isuue, is delays due to boarding, I think.

Please let me set all boarding to force end turnaround on 90% loading of the airplane, make it a global setting. I dont care about PAX that are not on time.

A secondary delay is due to airplanes killing halve the airport waiting for an airplane that is 60 blocks away from crossing.

The finances needs to be relooked at. The numbers between the books and the actual cash flow don’t line up. I’ve done the recalculation of the loans in the past, and IIRC the interest rate is off with the amount you actually pay.

My airline satisfaction is quite good, low prices, no delays, 100% baggage, good structure. The auto- planner ratings just don’t make sense a lot of the time I agree.

Of course, an obstacle for PAX are the checkpoints, the thing is though, even when you have double the security staff as needed on checkpoints, they still fall still in staff-shifts changes, which loses you a 100 PAX queue. 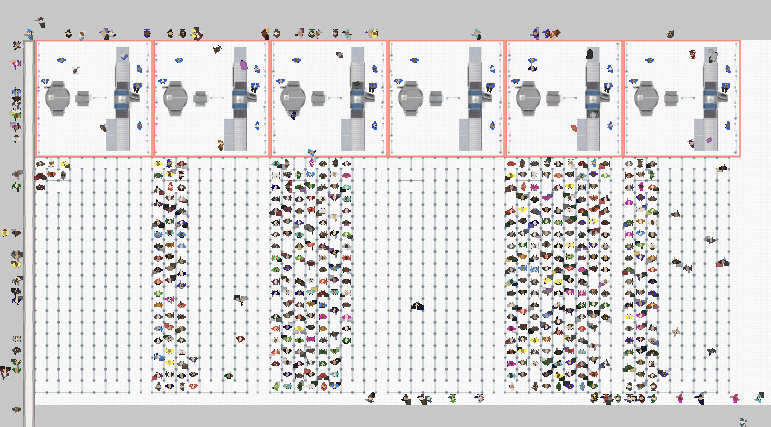 Do you spot the staff changes?

IMO having long queues is bad because you can see the lines that are completely empty while the others are completely full or half full. Because if they’re outside the queue, they’ll continue to bounce between the different securities 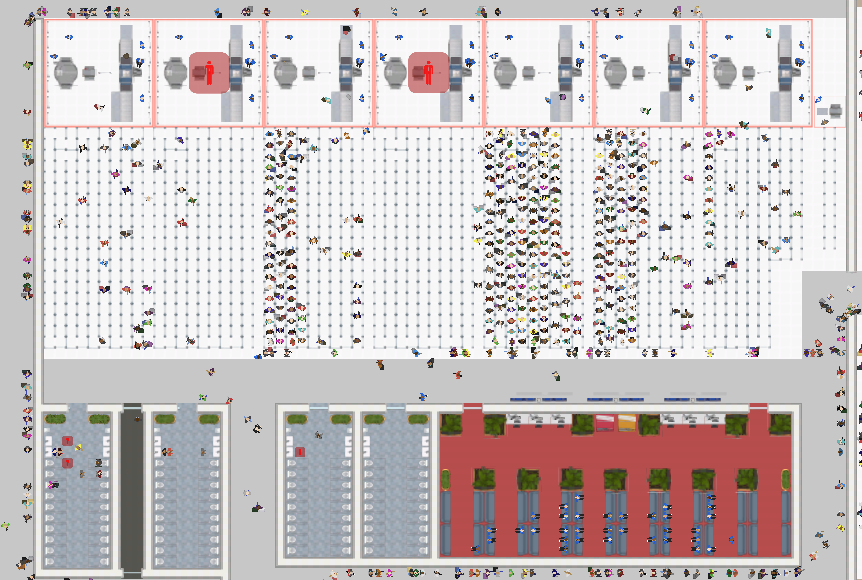 Let me leave this here. If the staff changes would be optimal, queues would not be an issue. Also, still would like to make my own flight distribution template for the auto-planner.

Edit; just had 4! out of service at the same time.

The other solution is to connect multiple checkpoint to 1 queue and have the pax select checkpoint only when they are at the front of the queue.

You can connect 1 queue to multiple checkpoints?

No, I’m saying that what the devs can add to solve this problem.

Cause thinking about it, the only bit they need to actually add is the ability to connect multiple checkpoint to 1 queue. Meanwhile, the code for selecting which checkpoint is open can be partially lifted from tilt trays and medium check-in desks, since they share the same purpose (separate one input to multiple outputs).

EDIT: And I think it already exists in its rudimentary form by selection of which queue to join. But just having multiple checkpoints connect to a single queue would drastically reduce the stalls for security checkpoints.

Thinking strategies, it would be nice if we could set a priolist for runways.

I want medium planes to land on my large strip first, then the smaller ones. But you cannot set that anywhere.

My biggest isuue, is delays due to boarding, I think.

I used to have issues there, and just added automatic boarding gates instead of manned gates. For a slightly more realistic feel and not going fully auto, I’ve added small manned boarding gates (the one-staff ones) to my medium gates and two auto ones, and I think that’s a bit overkill as I now consistently have fully boarded planes waiting for bags to load.

But I also notice that your baggage delivery rating is only 50%–perhaps inadequate baggage trucks, or ramp staff, or staff per baggage bay? Or maybe you’re destroying too many bags?

even when you have double the security staff as needed on checkpoints, they still fall still in staff-shifts changes

Also had an issue like this in a previous airport. I ended up having to tweak my ‘standard’ layout. What I ended up doing was zoning the baggage scan area away from the baggage bays, and either immediately below the security checkpoints, or just beyond them in a staff-only zone. Then the security officers’ staff room would be built next to the baggage scan area, and connected by a lift/elevator to the appropriate floor if needed. That way, security officers are forced to operate within a small area of the terminal, and that seemed to solve the problem.

Similarly, my ramp agents all use a staff room that is next to the baggage bay, and connected directly to the attached stands. That stopped their delay in reaching the planes as well and reduced the load on my security checkpoints. What I do have to keep doing, however, is to keep an eye out on whether they’re exiting the secure area and re-entering through the checkpoints. If so, I find that the problem is solved by rezoning their staff room and toilet as secure, and then they start using them again. Probably a bug, because when I use the overlay, the zones are still ‘secure’, but they’re just not using them.

On the other hand, I’m having issues with airline consumable satisfaction (I kept them at default prices) and also passenger activities. They don’t seem satisfied with the food and store options I assume, but I don’t have the space to build the massive 6* restaurants either. Any tips on whether it’s better to build multiple shops and give them choice, or to build one big one and try to force meet the sales target?