Planes taxi to the wrong runway

So I made my runways prior to landing or takeoff, departure or arrival as it is called ingame.

But my planes still route to a runway that is on arrival only, not just 1 plane, all of them. I tried saving and reloading, but they don’t seem to understand. After standing there for like 1 ingame hour they turn around so the next one lines up for another hour, etc.

Anyone else tried this and came to this conclusion or am I the only one?

FYI, the runway setting were changed before planning these flights. 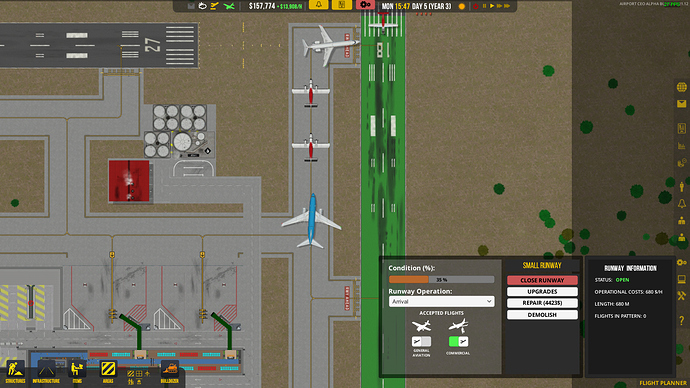 I have this issue too. I have not found a fix. The only thing I can figure is an arrival and Departure runway with 1 taxi way to each, designating the departure runway early on with the RUNWAY AHEAD designation. But, I still get a lot of bizarre plane movement.

Good enough to report as bug.

I will post again if I found a solution.

Is it because of the wind direct mean that your planes cannot take off from the departure runway?

Theoretically it could be, but I don’t believe wind directions are YET implied to ban a runway. Next to that, it says it’s cloudy as symbol, so I believe it should have said heavy winds then. Maybe the devs can enlighten about the impact of natural phenomena at this stage? @Olof or @Fredrik

I think that if the arriving and departing aircraft are in the queue from a scheduling perspective in-game, the routes are already determined. Or at least that’s the behavior I seem to have seen.

In other words, changing runway assignments to arrival or departure with planes already in the air or on the ground doesn’t alter the original route and assignment. You’d have to wait until everyone’s gone and there’s nothing in the arrival queue for it to actually take effect for the next contracted arrivals.

The devs would have to confirm, though. I could be completely full of it (I often am).

If you want to get them to go to the runway on the left, you need to add some hold points. else their pathing will take them to a runway with hold points, then they go all wonky.

Lol, I didn’t even see there was missing one. Thanks! Gonna test it tonight.