Passengers before boarding and deboarding

I made a test terminal (sandbox) and I tried to surround my boarding desks with walls so that passengers who aren’t boarding don’t go past it as it isn’t realistic to have passengers just getting through the boarding desk freely like that, I also have doors with a staff only zone painted on them so my workers can get through…
But at my surprise, passengers does actually pass through the boarding desk “queue” and can roam freely outside on the bus stop.
Passengers should only be able to cross the boarding desk when they are actually boarding.
Arriving passengers should obviously be able to pass it on the other way, but a “entrance only” door would be really nice to have for this !
Here is my setup and PAX beyond the desks (note that I haven’t any flight landed yet on this save, they aren’t deboarding or boarding). 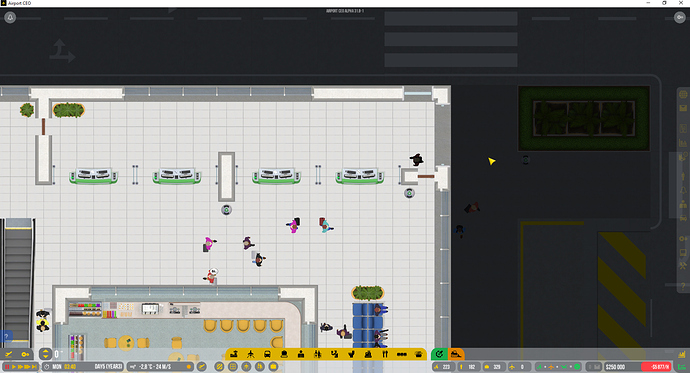 Because path finding algorithm doesn’t recognize boarding desk as a “non-passable wall until boarding”. Imagine passengers as 3 years old children who can go anywhere in anytime.

True, after playing game like Banished, Planetbase or Ostriv, I am familiar with “idiot” uncontrollable characters who does what they want.
In ACEO the Security Checkpoint fixed this issue by using staff zone on them but allowing PAX to go through but only if they were performing security check (where they are probably on rail and don’t rely on the pathfinding when entering it which is why they can pass) and the Security Exit allow for one way only passengers to get through, it may use the same “on rail” system which mean PAX probably don’t see the Security Exit as a door but as a desk to get to when this is time to leave the security area.
The same could be done with Boarding Desks, a staff zone to prevent PAX to get through outside boarding, using “on rail” animation to get them through and acting the same way when PAX enter the terminal from an aircraft stand/airside bus stop.

With a security checkpoint you have one single tile as entry, wiches pisition you can’t choose. With the boarding desk you want pax to come from all directions.
Besides that, in my experience with desks of any type, people in reality won’t go around an open area in front of a desk just because it’s not the desk they need.

Well actually Security Checkpoint don’t even need to build queue to operate and usually PAX just group up in front of both when its time to get through, also wherever you put it on a secure/non secure zone limit (Checkpoint) limitation or not (Boarding Desk placed anywhere in the security zone), this doesn’t matter because in both cases the pathfinding algorithm simply make the PAX get in front of it.
So at the end this is what happen in the actual Desk/Checkpoint that’s matter, so there is basically no changes about that, this is what happen when they are getting through which matter.
The only real difference is that the Boarding Desk have two sides where passengers get through, but even there this isn’t a problem.

And I don’t understand what you meant in your last sentence, could you clarify please.

With a security checkpoint you have one single tile as entry, wiches pisition you can’t choose. With the boarding desk you want pax to come from all directions.

And realistically boarding desks should be more like the security checkpoints. On every airport I visited so far there have been queues for boarding in front of them instead of passengers going from every direction like in Airport CEO. Similarly like for check-in desks there can be implemented just a single line queue even for the big (2-staff) boarding desks (unless different class pax will be there in the future).

Just found a way to avoid passengers roaming around boarding desk and bus stop. You simply have to make all the area behind boarding desk (including the bus stop) a staff zone.
Downside: Now passengers getting on and off the bus will “fly” through the wall because without legal way they just find the best direct connection to a non-staff zone. 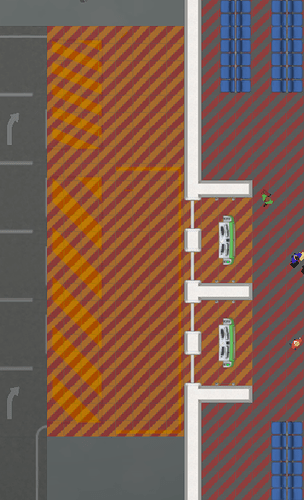 I already thought about doing it, but last time I tried, mine were simply unable to navigate to the Boarding Desk because of the staff zone.