back again with another question/issue.
I have built a big terminal with 2 main wings with medium stands only. It is basically a mirror design, doubled everything from check in to security and boarding.
I started running a single wing and everything went smoothly. When I opened the second wing an issue started occuring.
Basically some passengers (1-2 per aircraft) after checking in go through the wrong security checkpoint and go to the wrong wing to terminal, causing huge delays when boarding starts and they have to walk like hours to get to boarding gate.
In attached a screenshot with zoning enabled, I have read that could be due to a lack of seating near the gates? Also it is not possibile to connect security checkpoints to specific gates (everything else is connected: check-in, baggage bay, gate → everything in the correct wing).

I am also wondering if some other tricks may help (or if AI ignores them), for istance:

I also think that separating security zones is not an option, because all the vehicles need them to be connected to move efficiently (and staff inside the terminal also). 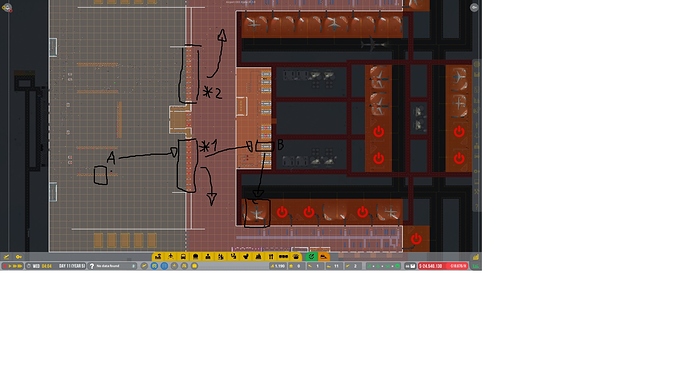 In the screenshot, i would like to force passengers checkin-in at A and boarding at stand C via baggage bay B to go throuhg security *1 and not *2, also forcing them to go to the south wing of the terminal (and viceversa for checkin-boarding on north wing)

Thanks for helping and excuse grammar/typos, this game is awesome!

To achieve what you want, you do need to create separate secure zones. I know it seems frustrating/difficult at first when you have your ideal layout in mind, but once you get it right, it is pretty seamless and flows very nicely. Plus, smaller secure zones work best in the current game set up, because, as you have experienced, the passengers have somewhat of a mind of their own.

You are correct that you “need” to have it one secure zone when you have all your stands next to each other, like in your screenshot, because the stand’s own zoning join the terminal’s zones even if the secure zone is appear to be separated in the terminal. The way I have learned to achieve this is to ensure there is a strip of unsecure squares that runs between my two security check points all the way through, dividing my two zones, until it hits a wall that has grass on the other side. The trick to remember, is one tiny, open square of secure zone can bridge two huge “terminals.” i.e. when the doorway/jetway to a stand is created, it bridges the stand’s secure zone to the terminals, and if that stand is directly bordering another, it absorbs it into its own zoning along with whatever else was securely attached to it, and so on. It is a devilish cascading effect. Then you need to save and reload if to see if you successfully separated them.

There has been plenty of discussion is previous threads with requests to allow the zoning you showed us, but allow players to assign specific security check points to specific stands all within the same secure zone. Don’t quote me on this, but I believe a revamp of the whole security checkpoint and process is one of the next “bigger” items to get on the devs’ plates after they satiate all us impatient players who want multi floor, fixed weather, catering, cleaning, etc. Basically, there is a functioning system that is due to get a major overhaul. It would be a waste to do a “quick” fix that can easily be remedied with some reconfiguring of your airport. I’ve learned this the difficult way that there is a method to the madness of the development of this game, and it does work really well. I have found that the beauty of the challenge of the game is to get it to work out for the builds I want.

Thank you very much @parillos

I will work at some reconfigurations in order to create 2 separate secure zones, the only doubt I have is if it is enough to separate zones inside the terminal and on service roads, leaving medium stands connected (doing a quick try I saw that after doing that the stands were correctly pointed to the checkpoints I want, just wondering if during gameplay that would be correctly interpreted)

Here it is after reconfiguration 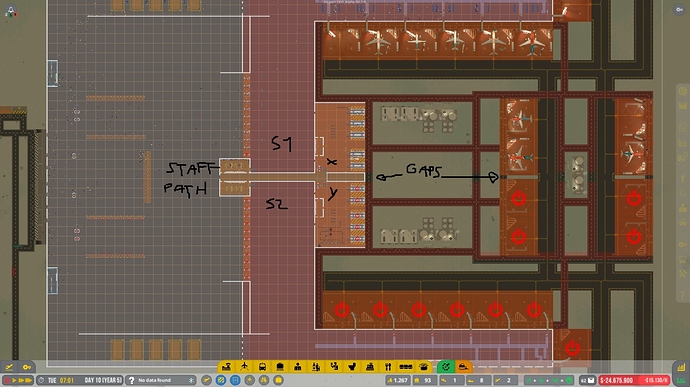 new%20zoning1366×768 271 KB
I have a built a staff stripe in the middle, with secuirty checkpoint staff only located a points X and Y which lead to secure area 1 and 2 (S1 S2).
Also created gaps in secure roads and separated remote stands by 1 square to avoid connection.
Now the stands correctly point only security checkpoint I want, I will keep you posted when switching on south wing of the terminal

Hope this can help if you face the same issue

Now 100% passengers are entering the correct wing of the terminal, I have to deal with remaining percentage of people getting late at boarding: any suggestion about this? I’ve tried to spot and monitor them early but it is pretty difficult, has this always have to do with bathroom/shopping/eating/resting needs or there are other things influencing “late behaviour”? Information screens?

Thanks a lot
Lorenzo