No Contracts on Experimental

I usually play with the experimental version, but since the release of the new patch, I get no contracts what so ever, and the existing ones are not recognised. The game is unplayable. For now I will revert back to the non experimental version. Is there anything I can do to get the contracts rolling again. In the normal (non-experimental) there is plentiful contracts.

I started a new game earlier, and got contracts. I’m on EXP too.

I can’t build because I have no contracts

Not even a construction one? It does take a few minutes before you’ll be presented with one.

No nothing. If a open a already built game I got nothing either. And the one that I accepted in the previous version are not recognized. All aircraft are converted to Cesnas 208

Something does not seem right there, you might want to bug report it then.

As a by, you could disable Construction in ƒ10

I will try again and notify. If not will big report
I still get no contracts 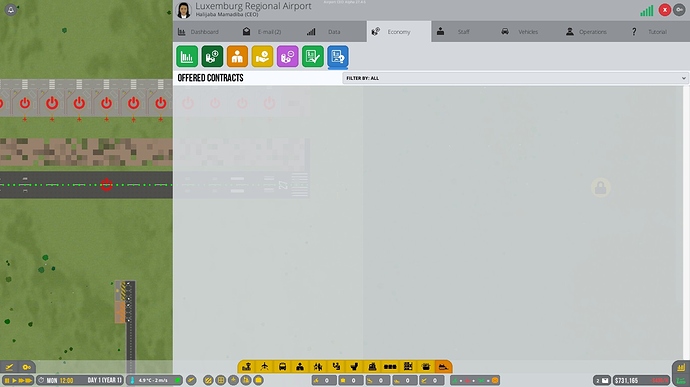 IDK what I have done but it has fixed itself

IDK what I have done but it has fixed itself

In cases like yours, I mostly reload the game, it works wonders in these kind of situations.