I don’t think there’s a reason to build a terminal for GA Airports except to house you, and a procurement director to procure new items like fuel trucks, so might as well save that money for more stands/runways.

Here’s a thought. If airplanes have to park at one of my stands overnight, have the pilots leave the airport for the night to find a hotel nearby. Then, in the morning, to get back to their planes, have them go through my terminal’s security. This would put a security guard’s wage to good use.

There could be several reasons for the pilot to leave his plane overnight. Maybe he just needs a break from flying and will spend the rest of the day in the hotel. Perhaps we could also toggle a long term plane stand option for a higher fee rate so that pilots could spend a day or two in the city that my airport is located in. Then, whenever he is ready, he will go through the terminal’s security to get cleared to fly again.

Also I’ve noticed it appears that fuel trucks cannot drive on taxiways. My airport doesn’t have too much room due to the layout for more service roads(I’d rather save the room for more plane stands).Maybe in the future we can set markers on the taxiways that allow trucks/service vehicles to drive on it? That would save a bit of money and space so that we don’t have to go through the trouble of constructing service roads that connect to the opposite side of the plane stand.

I don’t give a shit if the pilot takes a bomb on his own plane.
And also airport vehicles never drive on a taxiway… unless an emergency. There are service road parallel to runways.

This is true. What I am suggesting is that we can draw markers on the road that allow service vehicles to drive on the taxiways.

What about when devs implement remote stands they can adjust how GA works so GA pilots or even its passengers will transport to terminal by bus?

GA people tend to walk to the reporting point as opposed to get a bus given a whole bus for one or two people is hardly worth it. At least in UK airports I’ve flown into, such as Humberside, I had to walk to go pay the landing fees… Humberside is weird, you go out a small security checkpoint then all the way round to the information desk inside the terminal.

Well by bus what I meant was somethin g like this: 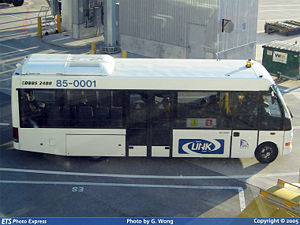 Or a minibus like Volkswagen Transporter or Ford Transit. The details about going there or here can be discussed later but I prefer people to not walk around apron. At least not in outside of where they should walk.

People walk all around the apron in real life though.

You get all the people on the stands servicing aircraft and driving around in trucks and things, the pushback manager making sure the wingtips don’t hit stuff and communicating with the flight crew, the airfield managers doing their FOD checks and picking stuff up/scaring birds off and operating follow me stuff etc.

You can assume GA pilots are idiots and will walk across an active runway if the path isn’t marked properly (Seen it, almost done it) so… The lack of transport for GA aircraft isn’t so much to imagine.

Would there be a role for a GA terminal, which would probably only need a small security checkpoint and somewhere to sit, maybe an office as well? I’m sure those of you who actually participate in GA could elaborate on this, but I’m pretty certain pilots don’t just sit in their planes when they get to an airport.

Semi off-topic but when Harrison Ford lands his plane at my local airport to get it serviced, he heads downtown to a strip club lol. I guess Duncan Aviation is pretty well known for working on airplanes, they do quite a lot of work on G5s and famous people’s personal airplanes.

You’ll find lots of small airfields like Netherthorpe, Retford and Peterborough Connington will have a nice little cafe on site that the pilots will go have a cup of tea at before flying off to the next one/home.

At all airfields you will have to go to the reporting point denoted by a Black C on a Yellow background, this is where you’ll sign that you’ve been and pay any fees like landing, or fuel (If it’s not a pay-at-pump scenario)…

You can build a service road across taxiways.

Also, GA airports rarely have security. I’ve just parked the plane, jumped a fence and I’m on the beach.

Depends if they’re international or not usually…

I think a security checkpoint is not needed for GA pilots, but having a reporting/recording station is just enough.

In reality it depends on the size and operations of the airport. At a small aerodrome near me there is no fence. No security check for anyone but no comercial international flights either. At London Gatwick everyone goes through security. From pilots of international airliners to the security officers themselves. The only people excempt from security are armed police and other emergency services when they are on a shout. LGW has a small GA hut accessible by one of the vehicle access checkpoints but ga pilots and thier passengers still have to go though security to ‘airside’