How does boarding on small stands work?

Remote stands are not yet implemented, decoupled boarding desks are implemented but they (for a very little time till). They walk with a direct path at the moment but I will soon update that to get the ability to build boarding corridors.

So what you are saying is, that i actually will be able to place the boarding desk like this without people walking trough walls?

No,they will use the door if I am correct. At least I always placed a medium door at the pedestrian crossing. But try out and tell us if it works.

I am unsure that will work, as those are remote stands. Give it a go, but don’t expect it to work. Normally commercial flights require the stand be right up against the terminal. Be prepared to extend your terminal up to the service road there. When you do that, a special door is made that the people go through, you do not make the gate door yourself.

You can move from the terminal to a small stand via a secure area crosswalk. I did a “commuter concourse” this way. 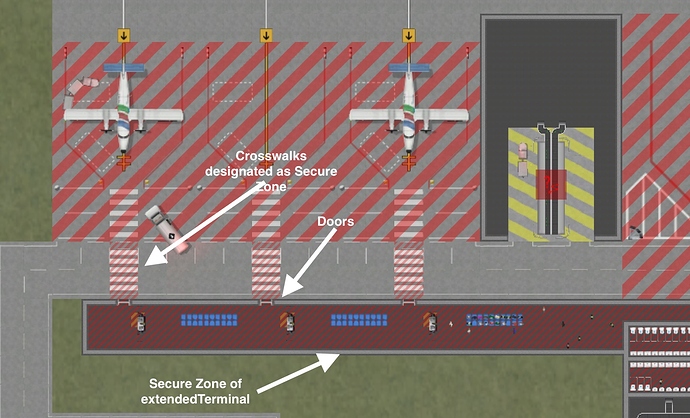 That’s sweet. I don’t think the OP will work though with sidewalks, he might get it to work with an overlay of crosswalks though if yours worked.

I haven’t tested, but I’m pretty sure crosswalks are limited to roads (regular or service).

Related, I attempted originally to make this an “open air” boarding area using tarmac and fencing (placing the boarding desks back in the main terminal area) but you can’t designate tarmac as a secure zone. Though those are fewer and fewer, there’s still some of that type around.

Hey, i cannot paint stands to be secure zones, do you know how to fix that? 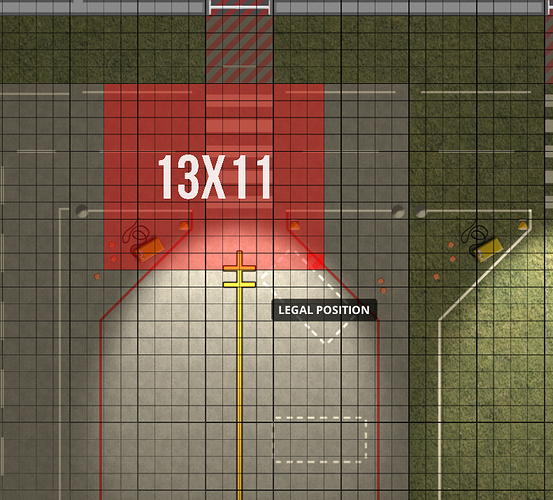 Once the small stand is turned on for commercial, it becomes a secure area on its own. You’ll have to have a boarding desk available for it as well (before turning on commercial flights).

Click somewhere on the stand and this dialog pops up. Enable commercial flights using the right slider. 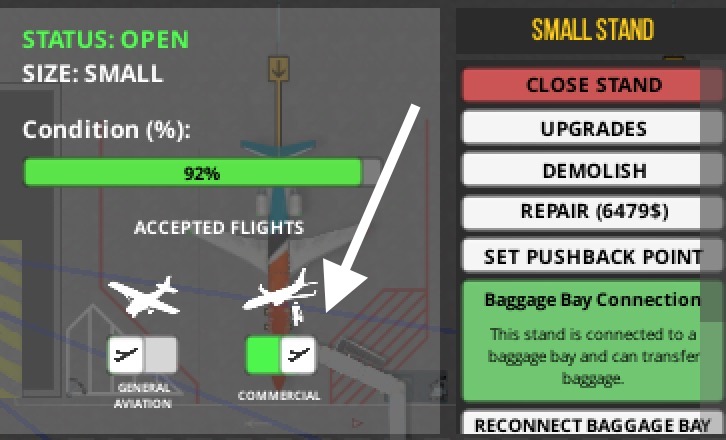 I can confirm that remote stands are very much possible and do work via crosswalks/secure zones. People even use the Sidewalks and are not running directly into the turbines of another plane

Screenshot follow when I am at home somewhen tonight.

Hey, i cannot paint stands to be secure zones, do you know how to fix that?

Stands are always secure so no need to paint it.

So what you are saying is, that i actually will be able to place the boarding desk like this without people walking trough walls?

Looking into this. They are using what we call direct path when boarding. If the sidewalk is secure, they should be able to plot a path to the stand but need to verify this.

I also can confirm it. But I found a pathfinding bug in that case.

On first Picture you see the arrival passengers, walk correctly on the as secure zone marked walkway (3. Pic). 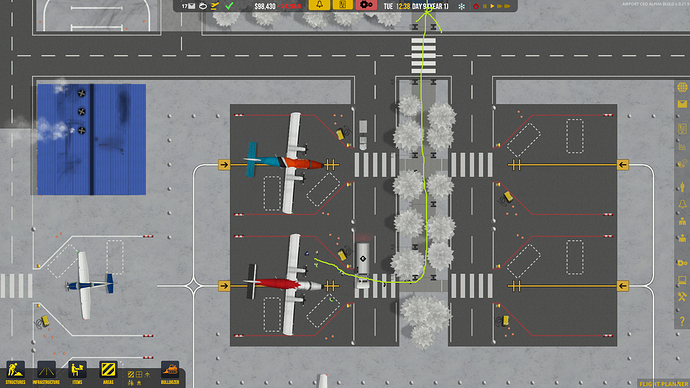 PAX_BoardBug21918×1080 661 KB
On second Pic you see de boarding departure passengers walk directly from Boarding desk to the plane stand entry and not on marked area. 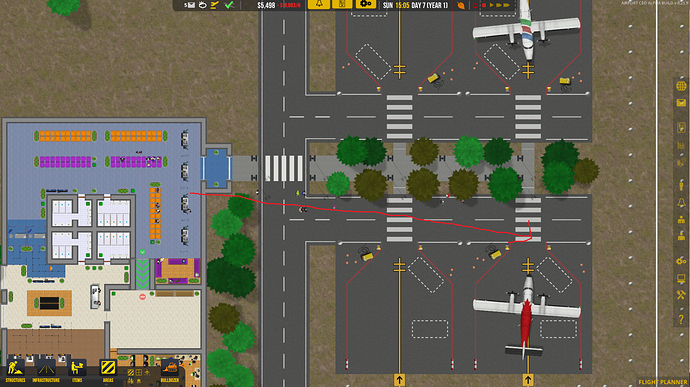 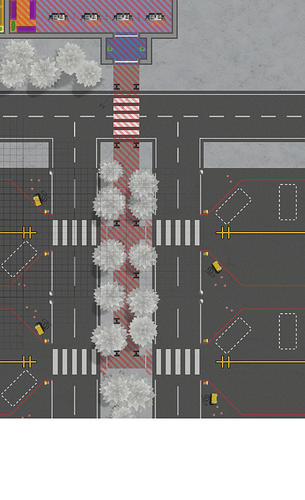 I’ve used a path like this and secured the path. Arriving passengers plot a route following the secured path. Departing passengers go in a direct line from boarding desk to the plane, ignoring walls.

So basically you build remote stands and they work. I’m gonna try this tonight myself with longer distance in between.

Yes. 4 “remote” stands, one walkway and for each stand a boarding desk. From functionality everything is fine. only what I wrote in my last Post, the Path for boarding departure passengers has a bug. 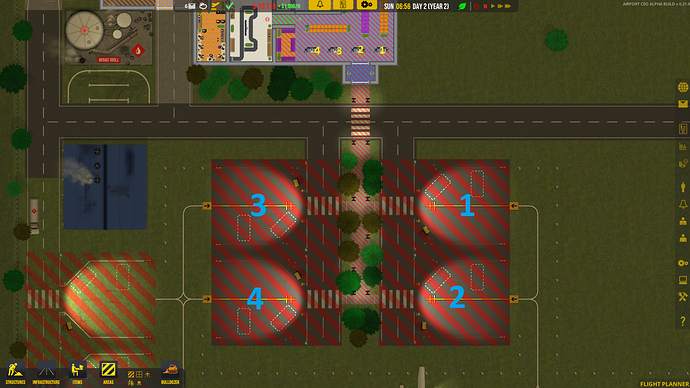 Looking into this. They are using what we call direct path when boarding. If the sidewalk is secure, they should be able to plot a path to the stand but need to verify this.

My sidewalk is secure, but they are still walking a straight line.

Yes, I think they are setup to go “direct” so it is a bug.

Edit. And btw I think it is pretty amazing that this was thought out by you guys and actually worked (somehow at least). We didn’t even think of this solution.

Looking forward to the fix. On of the few things that really has been annoying me about the game.
Having small stands not directly beside a building gives you so many more design options

I’ve tried designing it like this, it also works (don’t mind the security check and exit, it used to be a secure zone in both buildings + the crosswalks, I had to remove it to test another issue). That way, you can actually have seperate terminals, as long as they’re connected via the secure zone. 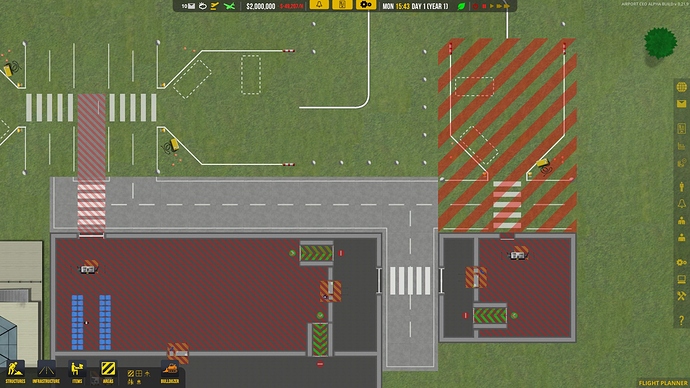 You can actually even zone it like this, and it works for me. The pax don’t have direct pathing to the stands as well. 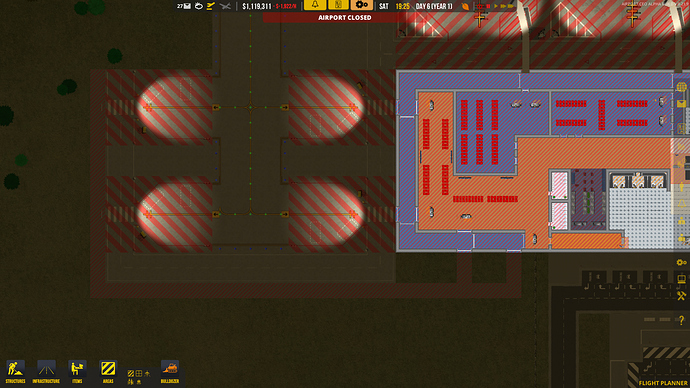