How can I (re)assign CEO to a terminal?

I don’t remember how, but CEO (me) is assigned to Terminal 1, but I want to assign him to Terminal 2, because his room is in the Terminal 2 after some rework. Is it possible?

That’s a great question! I actually don’t know the answer to that. Does anyone else know?

I didn’t even know that it gets assigned to a terminal. In worst vase it can be changed manually in the game files.

For now, CEO (me) cannot enter his room and just is walking through the terminals, and seating with passengers… poor CEO

Can you send in a bug report and post the number here?

When you have done that, you can try edit the assigned terminal in your savegame directory.

There you find a file named PersonData.json
Open it with a text editor and search for the name of your CEO.
Then there should be a field named “assignedTerminalNbr” with the number of the wrong terminal. Edit that, save it and then, your CEO hopefull walks to the correct terminal. 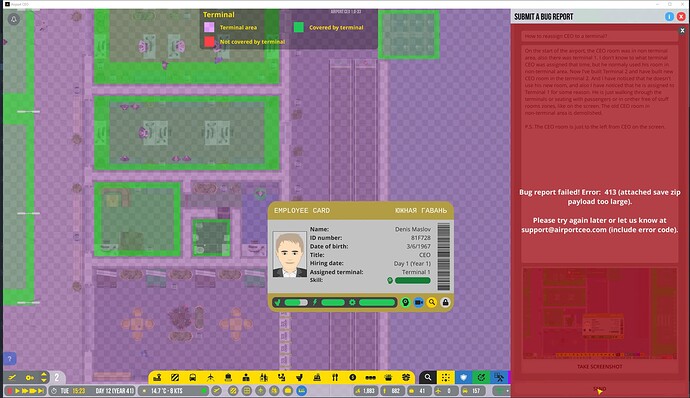 P.S. No any mods installed, no any things like big world map and etc, no any manual changes in save files or configs. Just vanilla version from the steam.

Ok, here we go, I found an in-game “normal” way to assign executives (including CEO) to a terminal.
You have to just draw terminal area over the person with the terminal tool. So I found me (CEO) in the airport (it took a long time … ) and first of all remove terminal zone over him (made a hole in the terminal zone) and then redraw over him the same terminal zone (like fixing the hole). Profit, the CEO is assigned to the terminal that was drawn over him. I believe it works for all staff, like it works with the buildings.