I filed a bug report in-game but I didn’t note it down since the message stated the report number would be in the log… where is the log file? lol

Vehicles I believe have a ‘keep to rightmost lane’ and will do some strange turns even though their most efficient path is straight ahead. Found catering trucks and cleaning trucks turning into the baggage bay entrance.
I had a design which necessitated left hand traffic but the vehicles would keep moving to the right and causing jams. One way streets barely helped so I had to tear it down and rebuild with right hand traffic.

This also messes with multi lane traffic where if you put 4 lanes down, I noticed the directions that the vehicles will drive will alternate… if you have a north-south road, they will drive north in the rightmost and third from right lane while driving south on the second from right and leftmost lane. 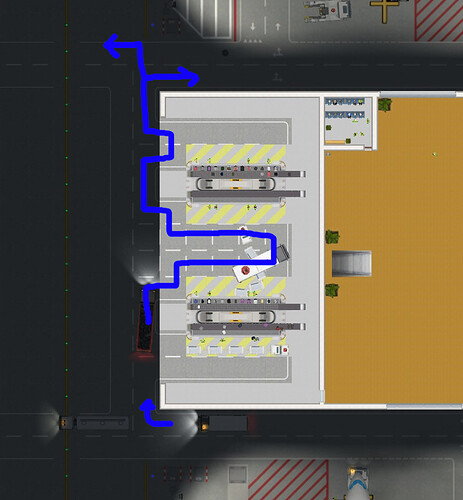 Planes appear to have a pathing issue when a runway has exit ramps on both sides of it. It only seems to happen if one is a straight and the other side is a diagonal in this layout. Seen it with all sizes of planes.
The north ramp only connects to the hangar and there’s no reason for the takeoff plane to go that way, but it actually lines up and waits on the ramp on the north rather than the south then turns back around to take off on the runway westward. 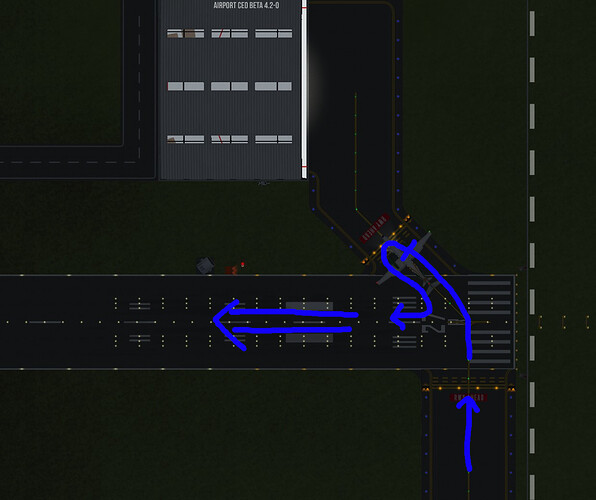 The vehicle issue will be fixed in tonight’s beta 5 update.

This also messes with multi lane traffic where if you put 4 lanes down, I noticed the directions that the vehicles will drive will alternate… if you have a north-south road, they will drive north in the rightmost and third from right lane while driving south on the second from right and leftmost lane.

For bigger roads, you need to drag one way roads over the full length like on the picture (in my case it’s a two lane one way road but you can do what ever you want

That should at least solve this problem.

For bigger roads, you need to drag one way roads over the full length like on the picture (in my case it’s a two lane one way road but you can do what ever you want

I should have been a little more clearer.
On long roads like that I did that and it was pretty good. It’s on intersections, the junction to the offworld road and the underpasses where you can’t set one ways where the vehicles will try and force themselves into the right lane, essentially going the wrong way in relation to the one way markers on the road ahead. At least it seems to happen when you want a one way two lane road going into an underpass which connects to a two lane road in a T-junction underground.

The passengers have the same kinda behavior. If they are walking along a strait corridor and you have a bathroom let’s say on the right side. They will keep hugging the wall and take a detour inside the bathroom hehe. Same that they rather find seating underneath/above their destination rather than going close to it on the same level. I.ex if you have check-in on floor 1 and under check-in is baggage claim. They will go wait in baggage claim for check-in to open.

Haha, yeah. I have issues with pax ignoring walkalators. 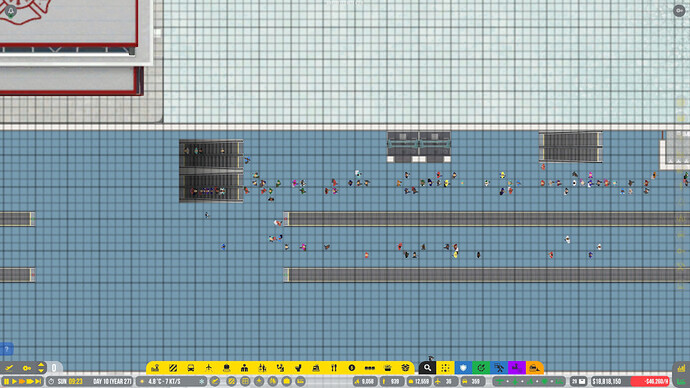 Same, all my passengers use the elevator because it’s closest i guess.

Not all passengers use the walkalators but not all should ignore them either, if that happens then it’s for sure a bug. Pax should also distribute between transition intems and not everyone should go for the nearest elevator etc.

I’ll observe some more and file a bug if it keeps happening in 5.0
In 4.2, I had to build the walkalator entrance right in front of an exit like a escalator or stairs so the flow of pax lines up with the exit for them to actually use it. The pathing looked like they needed to ‘hook’ onto the entrance before they would actually go in it.

This is in 5.0. The pax going left minus a few who use the first escalator at the top use the walkalator but the pax going right coming up from the escalator seem to all ignore it.

Edit: To test a theory, went ahead and moved the walkalator entrance to line up with the flow of passengers up the escalator and they still keep avoiding it.

I will make a bug report and write the number here. I already did some time ago

but don’t have the number. Will send later tonight or tomorrow

Ugh… while I was concerned about the pax walkalator bug, the 5.0 fixes to the vehicles seems to have my traffic even worse since the baggage cars like to wait on the main road until the bay opens up, but even if I give other traffic a bypass to use, they won’t go around them and wait in line.
Another thing I seem to be noticing is if a baggage car is in the bay, the other vehicles on the main road refuse to go until that car leaves the bay with its ULD or baggage cargo and back onto the main road even though there is no physical collision between the vehicles. A line of baggage cars can back up a whole airport’s worth of other vehicles.

Opened ACEO-39219 for this on 5.0-4.
Cleaned up my Cargo bay access roads to test this and cargo truck will be blocked from moving into a bay further down that’s open if the one in front is occupied, ie: both both unload bays are occupied and unload trucks should queue, but load bay trucks should move into position.
When the truck occupying the unload bay tries to exit, a waiting one immediately tries to move in and they both get stuck. Issue is made worse that you can’t manually direct loading/unloading trucks into a specific lane. This is causing a lot of baggage to be late and planes be delayed. 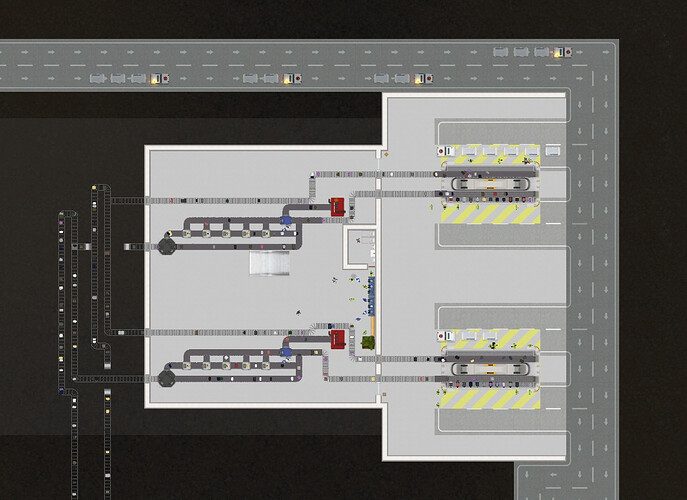 Before I modified it, I found the cargo trucks block all traffic on the main road from passing… 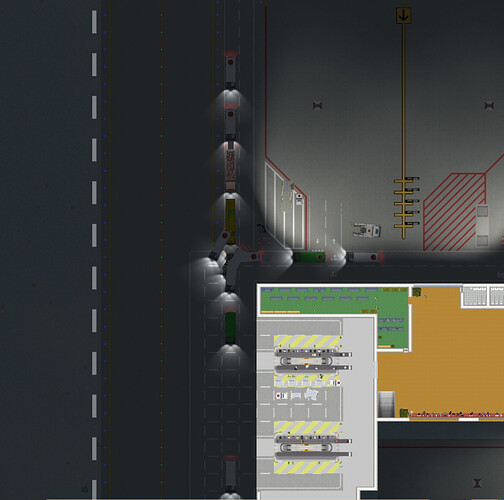 The only thing changed “with vehicles” (quotation marks because it dones’t really relate to the vehicles) is so that they don’t drive on that single baggage bay node (it had negative penalty). But in terms of vehicle pathfinding and so forth beta 4 and 5 are identical.

Made a bug report that no one is using the escalators when there is elevator next to them Bug number 39276. @Olof