So i think the auto planner is great but it can be a bit annoying as i find that if you have a blank day with no flights and have Multiple stands, it places the flights to land at the same time and depart at the same time which is great for a 1 stand:1 item system where you have 1 of everything for each stand but not so for a 2 stand:1 item ratio which is how i setup the airports i build, what i would like to see is a another function for the auto planer where you can set the minimum landing and take-off Separation between all the stands instead of a stand by stand basis. I hope what I have said makes sense.

Nope, I dont get it

Or keep the separation between flights on a stand how it is now, but by default not schedule 2 flights to land at the same time

So that i have have figured out how to post pictures here’s the suggestion using pictures and hopefully a lot more structured and clearer. 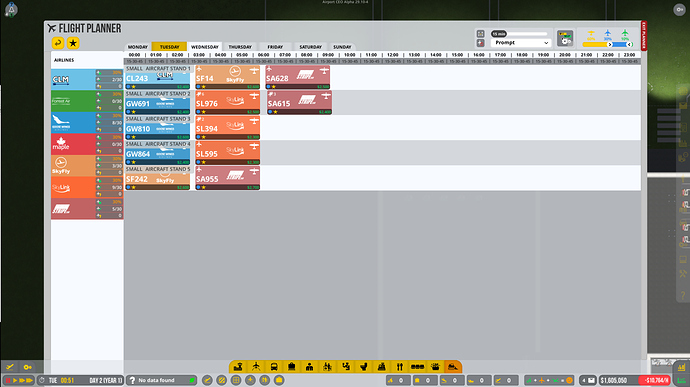 2019-02-13%20(5)1921×1080 381 KB
This type of flight schedule i find only works when you have a 1:1 ratio which is a ramp agent pair:plane/stand which i find works but has the employee sitting doing nothing for the rest of the 3 hours the plane is at the stand which in turn causes you to have a high chance of having a negative profit per hour mark even when you are making a profit each day. 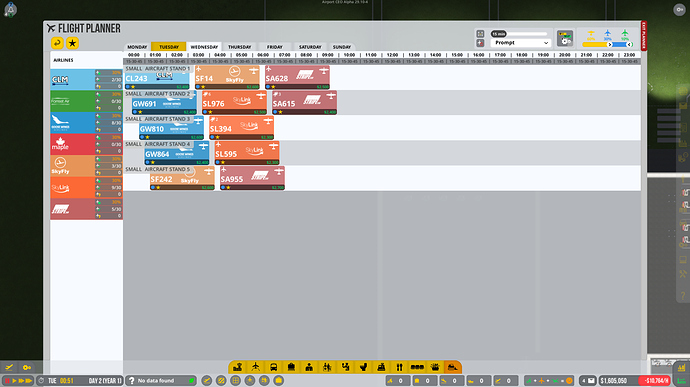 Hi! Do you know if something like this has been implemented?

I try to plan the arrivals and departures as you show in picture 2; however, it is really tedious when you have a lot of gates, and having a ratio of 1:1 is not very realistic, as you have said.

I normally take the time to place escalated arrivals; however, if I turn the autoplanner on, a few days later it gets very crowded again (with a lot of flight arriving at the same time) and I do not have enough resources to cover every flight.

I have looked for ideas like yours in the forum, but I do not find any similar post.