No matter what I do… there is no contractors to build anything. No matter the contract. There is always ‘0’ available. Any suggestions?

Have you signed a contractor contract? There’s steps to follow in the new tutorial for this!

I did thats why im lost

Sign the contract, then you need to specify a number to deploy via the construction menu (I think bottom menu before the tutorial).

If you’re not seeing any available there, can you screen shot your construction menu & contracts (accepted) menu?

Is your bus with contractors stuck? 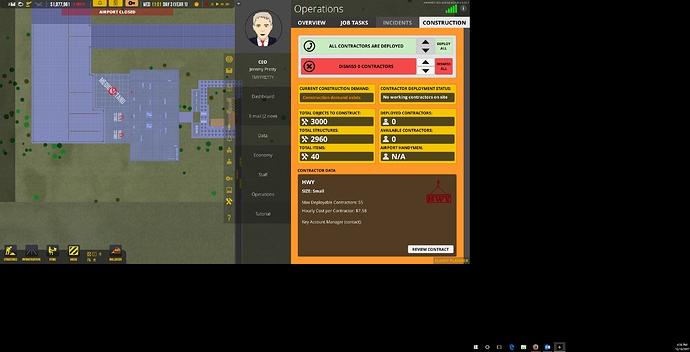 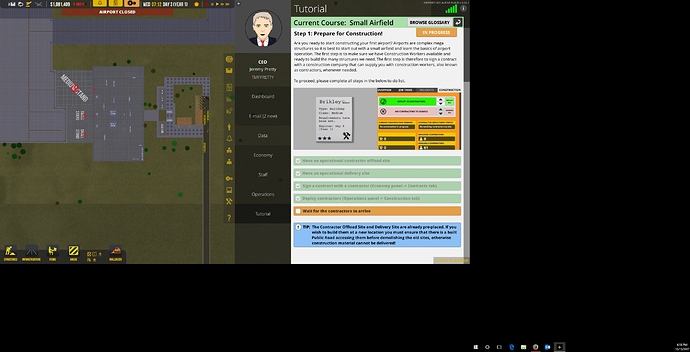 Have you tried sending this in as a bug report? Looks to me based on the screenshots, that there is something acting up.

Does dismissing all contractors and then deploying them again change anything maybe?

There is none to dismiss. Im going to send a bug report. This happens on every attempt at the game for me

Hm, I think I can see a glitch here. Can you send this save to us, i.e. file a bug report via the form?

The issue is most likely that the trucks do not correctly determine which contractor offload site to go to. My recommendation is that you demolish the two contractor sites you have and then build one new that is located by a built road that is accessible.

Wah, this happend to me when first time i played. It happend because I didnt build a foundation. i build a road and sidewalk first and after that sign a contractors but the contractors never come.

Might that actually be a bug with the contract itself? AFAIK, small’s price never goes down to that low.

Does it happen when you change to a larger contractor?