Baggage Problem In Check-in Counter and Cargo Bay, It Stuck there

I do not know why all my Baggage is stuck at Check-In Counter and Cargo Bay???

Do anyone have this problem ???

Could you show us some screenshots of this?

As PigScroll mentioned, post a screenshot (with the conveyor belt direction turned on)

and try reloading the game. 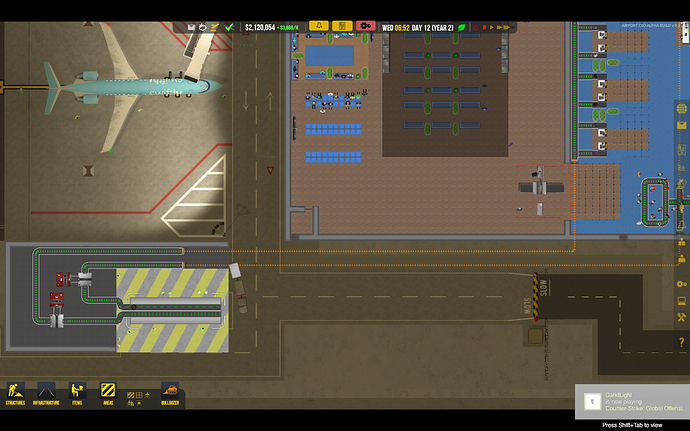 When I relogging still the same stuck

Are you sure that check in desks, baggage claim areas and stands are connected to baggage bay?

Pretty sure this issue is resolved in 0.22.0 (which will get pushed tonight) but can you send in the save so we can test anyway? I.e. via the bug reporting form on the website!

Edit: Wonder if that would fix some of the check in desks too, try reversing the baggage flow direction even if it takes longer to route

I am having the same issue. Baggage system all connected, no bags leave the check in desk.

I have tried straight conveyor and tilt… many different combos… no luck.

Yes I have check is all connected with no problem

Can you send me your save? I’ll try looking at it later.

Try reload the save in 0.22. We have done quite many bug fixes that could caused them to get stuck.

HI After the new update V0.22 the Check-in counter to Cargo Bay is ok,

But the. Cargo bay won’t go to the Baggage Claim area it stuck there nothing change.

Do you have service trucks to load the baggage?

Yes I do have 4 services truck,

MINE IS THE SAME!!! It annoys me so much.

Can you file a bug report with these saves? We’d like to get our hands on it and test.