Lately there have been some new implemented features and upcoming + requested features that can expand an airline’s potential commercial relationships with players. It can’t be denied that the current contract system already works, especially for the flight management aspect, however I feel that this system could be expanded even further particularly with the new features that have been released thus far. Thus, I propose the following Airline Contracts 2.5 to expand on the current system with the following pitch: master contract is just the start of a hopefully long lasting commercial relationship.

So I just need to service flights? That’s easy!
Or so you think. Once airport management improves relationship with an airline above the cap (e.g. from Level 0 to Level 1), then the airline would start demanding more concrete services. For example, to maintain Level 1 relationship, airline now demands access to at least Jet A1 fueling services, de-icing, etc. In the highest relationship (Level 5), these demands can be quite extensive: minimum numbers of check-in desks (X number of manned desks, self-check in desks+baggage drop), space for ticket sales or airline offices, airline turnaround completed with 95% punctuality, pax satisfaction requirements, special fees or prices for turnaround services, etc. Failure to maintain these conditions would reduce the airline relationship.

Why should I cave into these (obviously crazy) demands from airlines?
There are many reasons for that. The first and most obvious ones is that airlines are willing to offer much more volume. As your relationship with airlines deepen, they will offer new flights at a much higher rate. The mix of these flights would also be more lucrative; much more mix for larger aircrafts (e.g. from 90:10 small:medium at Level 0, to 10:50:30 at Level 3, and finally to 0:30:60 at Level 5) and many being regular flights rather than one-time flights. This could also be expanded further with a minimum, since relationships work both ways: airlines will offer always have a minimum number of flights maintained at the airport (e.g. a airline with Level 3 relationship would maintain 30 flights minimum; a Level 5 relationship meanwhile means a 50 flights minimum)(and if the player closes a stand which cancels all flight, the Airline would almost instantly offer as many flights as necessary to reach the minimum flights as demanded in the contract). Airport management is also able to offer more slots in a week to airlines, from the cap of 50 up to 250/350.

What is this about “Hub” contract?
This is essentially the same with what others have suggested in the past. What 2 cents I can add to this discussion is to make the creation of a “Hub” a two-step process, which involves sub-contracts (I’ll explain below what it is). Suffice to say, airline will give a lump-sum payment to airport management to finance the required expansion to turn their airport into a true “Hub” for this airline, as well as a huge chunk of daily income in return for a very extensive and high quality service demanded by the airline. To make it balanced, perhaps Level 5 is limited to just 1 airline/airport.

But how do I know what my relationship level is, and whether I level up?
Don’t worry, under this proposed system, airlines can’t force you to move to the next level of relationship without your consent (it is a relationship after all, not a hostage situation

). You can always review your current relationship level in your master contract, and with the right board members you can even view your relationship as a progress bar!

Once the airport management and the airlines reach the milestone to advance to their next level of relationship, the airlines would send an e-mail to the CEO wanting to take the co-operation deeper (see Exhibit 2). The airline would then send a “Mutual Cooperation Agreement” (see Exhibit 3). If you’ve ever played Prison Architect, think of these agreements as the “Grants”; i.e. missions for the airport management to complete. The agreement mostly covers required aspects / services that airlines expect the airport provides at the next relationship level. Upon the completion of a cooperation agreement, the airline would send a new sub-contract solidifying the conditions in the cooperation agreement (as a form of addendum/extension to the master contract)(see Exhibit 4). Signing these sub-contract would usher in the new relationship status between the airport management and the airlines. Thus, using the hub contracts for example, under the mutual agreement, airline would send a giant lump sum of money to the airport in order to finance the completion of this agreement (e.g. having the required numbers of stands, etc.), while the signing of the sub-contract will give the airport the daily payments for the hub status.

Keep in mind the CEO can always reject this cooperation agreement with the airlines, with no penalty to relationship (should they believe that this agreement is nothing but a farce).

TL;DR: Creating a relationship system for airline contracts (with the addition of a grant system from Prison Architect), with added demands from airlines but provide more opportunities to make money from airlines than just servicing flights.

I believe that having a relationship system would:

Why it should not be implemented:

Reasons to vote against this proposal, which I can think of (so appears to also be neutral/logical/pragmatic in my proposal) are: 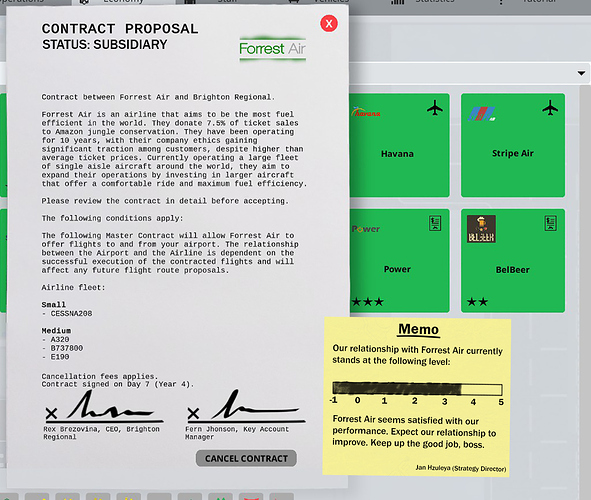 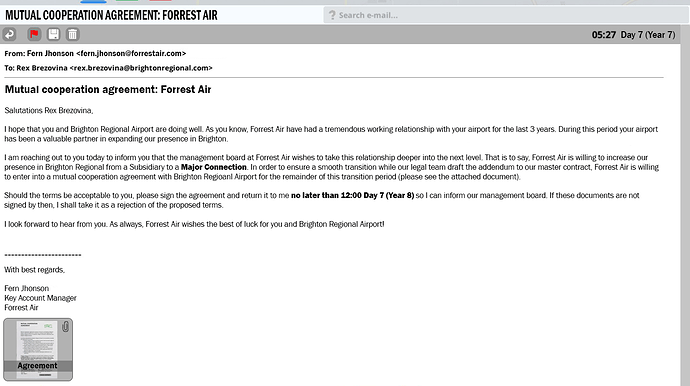 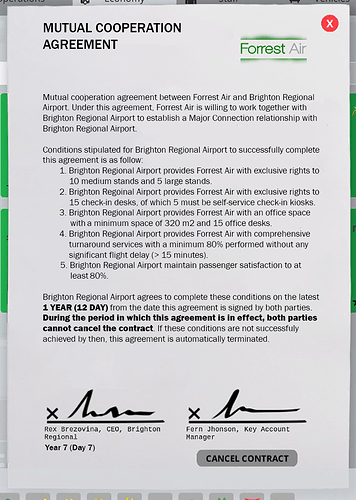 Disclaimer
Many of these ideas are not mine (e.g. ticket sales, airport hub, administrative offices, etc.), credits due to the community for contributing them. My idea is just how to integrate them into a more natural progression. This proposal is open to further discussion and engagements. Sorry for the blog post, here’s a

Would be nice having both of them in game. It’s would be just perfect

Yeah, I was also thinking about that, with the potential for airlines to cancel the master contract because they are unable to make money (e.g. because you offer flights to too many airlines or your position) for example.

Anyways, I got Exhibit 1 up as an example.

this is too long to read

There’s a TL;DR there.

TL;DR: Creating a relationship system for airline contracts (with the addition of a grant system from Prison Architect), with added demands from airlines but provide more opportunities to make money from airlines than just servicing flights.

Wow, woooow! I find this a fascinating proposal, I love that it is explained in such detail, it is the proposal that has more details that I have seen, I congratulate you @ReV0LT , I agree that the agreement is mutual and that both parties can ask for things or cancel them if they wish. I’d love to see this theme implemented in the near or medium future. If the proposal had 40 votes, it would be perfect.

I would like that, too. There has been a lot of threads regarding airline contracts, but the basic idea is the same. Contracts that really differ, with airlines setting different needs and demanding certain infrastructure - so the decision, which one you choose, is a real business decision and not one of which airplane design you favor.

And I like this thread very much, because it is very realistic and well thought out.

and what do you think about negotiations?

Can we combine the multiple contract improvement threads?

Personally, I like for there to be negotiations (not just for airlines, but for all other contracts), but that’s out of scope of this suggestion.

I think you left this Exhibit.

Was too lazy to finish it, though I think I got my point across TBH.